New Jersey Collectorfest is back and bringing the best & rarest in toys, sci-fi, horror, comics, and art!

For one day only on April 6, 2019, the event took place on the entire second floor of the Meadowlands Holiday Inn in New Jersey and brought in dozens of vendors offering a variety of collectibles like action figures, statues, trading cards, video games, and more.

A limited number of VIP Badges were offered that not only allows early admission at 9:15am (as opposed to 10:30am General Admission) but also includes one free autograph from voice actor Larry Kenney (Lion-O from Thundercats), plus a swag bag that includes an exclusive Spider-Man art print by one of the event’s artists: Christian Espiritusanto.

Larry Kenney was joined by fellow classic cartoon voice actors Paul Soles (from the 1967 Spider-Man series) and Larry Storch (Joker from the 1960’s The Adventures Of Batman):

Attendees were lining up to meet these legends and to get autographs & photo ops. And some collectors were able to score some great finds on the show floor to get signed by them as well. Here’s Paul Soles signing an exclusive Funko Pop for a lucky fan:

And with so many vendors present, you’ll find not only the latest & greatest in collectibles but some of those long-lost treasures of your childhood!

A lot of these tables were run by people just like you & me – collectors with a passion! Be sure to check out some of the highlights in the video at the end of this post… 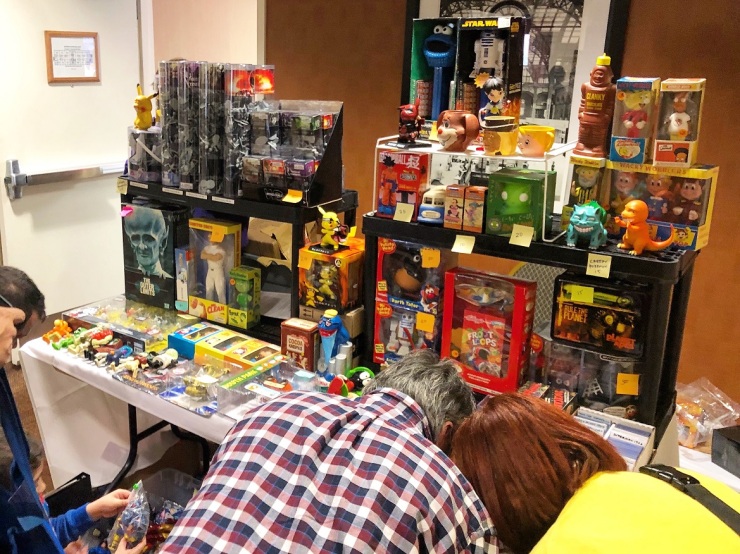 And with plenty of modern collectibles available as well, you might just find that elusive DC Multiverse figure you’ve been looking for, or maybe something to help you gear up for Avengers Endgame later this month. And who can say no to Funko Pops? Several booths were offering some great deals on these highly sought-after collectibles, including convention exclusives and subscription box variants: 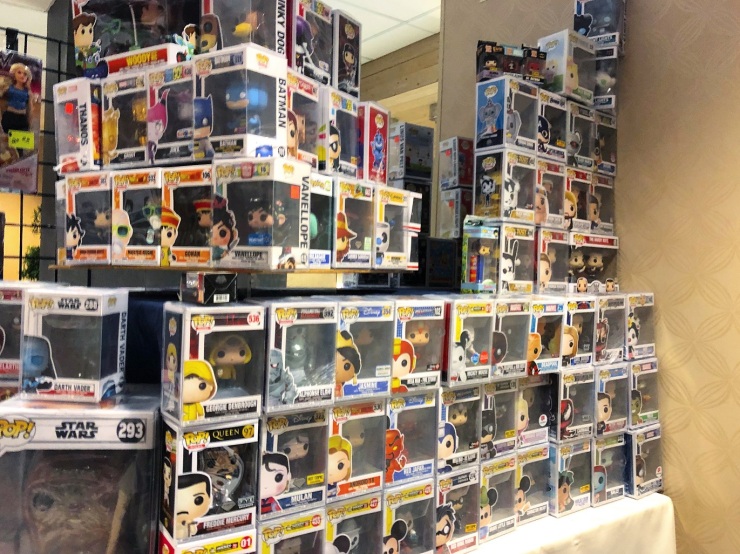 But if toys aren’t your thing, not to worry! There was a fine selection of video games, sci-fi & horror masks, and TV show collections too. Here’s a Spidey cosplayer watching re-runs of Thundercats & Spider-Man (1967): 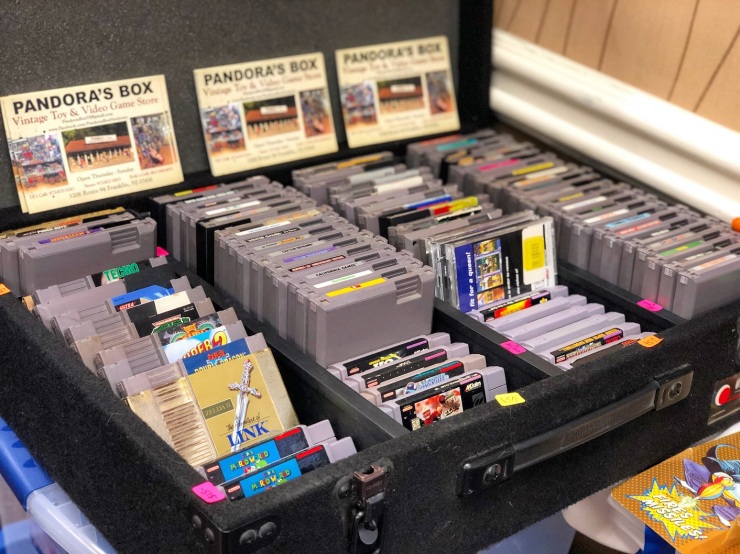 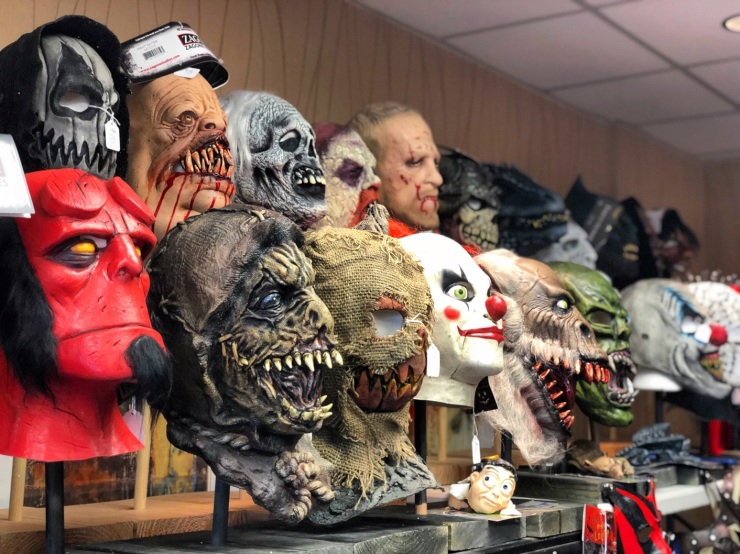 Last but not least, the show boasted some great art & comics to choose from. In addition to Joe St. Pierre, Keith Williams, and Rudy Nebres, dozens of local indie artists were showcasing their comic book repertoire.

Looking around the show, you might even be able to find a few comics that you could get signed by some of these talented creators.

Otherwise, many of the artists in the Artist Alley had prints, originals, and spots open on their commission lists.

Here self-published writer & artist Will Torres is working on a fan’s original art request. He displayed a few finished sketch covers for sale, as well as a comic book of his original character Mister Venture (named by Stan Lee):

Angel Santiago is another self-published creator (“Guardian City” & “Project Shadow Breed“) who had finished comic book sketch covers for sale as well as some beautiful prints, including a special prismatic Batman & Catwoman print that’s perfect to celebrate the 80th year of the Batman:

Studio MA-EN’s Enrique “Quique” Lopez & Marimar Lopez were also working up some originals for fans, as well as offering a very limited set of Lion-O art containing 1 print and 1 trading card (each signed & numbered), which was perfect to get signed by Lion-O himself, Larry Kenney! The duo was also debuting brand new mini prints and inked art: 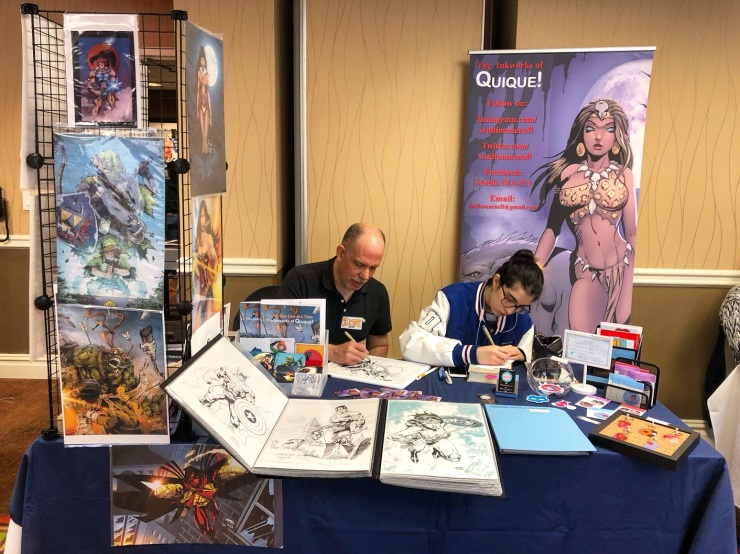 And Fat Guy Inc.’s Brendan Shaw was working on a special mini-canvas painting of X-Men’s Magneto for the show. Brendan is a Topps trading card artist and well-versed in all things pop culture, which shows in his diverse selection of art!

Whether you’re looking for a toy from the past, the newest GameStop exclusive, or even an original piece of art, New Jersey Collectorfest is the home of all things collectible. There seemed to be a little bit of everything for all kinds of collectors and it was a thrill to see! I had such a great time checking out all the vendors & artists, and meeting the special voice actor talent there.

Be sure to check out New Jersey Collectorfest’s Facebook and website for updates on their next amazing collectibles show!