Ever since I was a kid, I remember seeing fall festivities up in Bear Mountain State Park. The area is already a great spot for hiking, picnics, barbecues, and nature walks. But come fall time, we look forward to Oktoberfest, based on Germany’s largest beer & folk festival!

Right from the gate you feel the buzz & excitement – from vendor booths to live music being played. On our particular weekend, the live band was Joe Weber Band (as seen on PBS) and they were great! The crowds were dancing, singing along, and bobbing their heads while enjoying the food. And speaking of food… 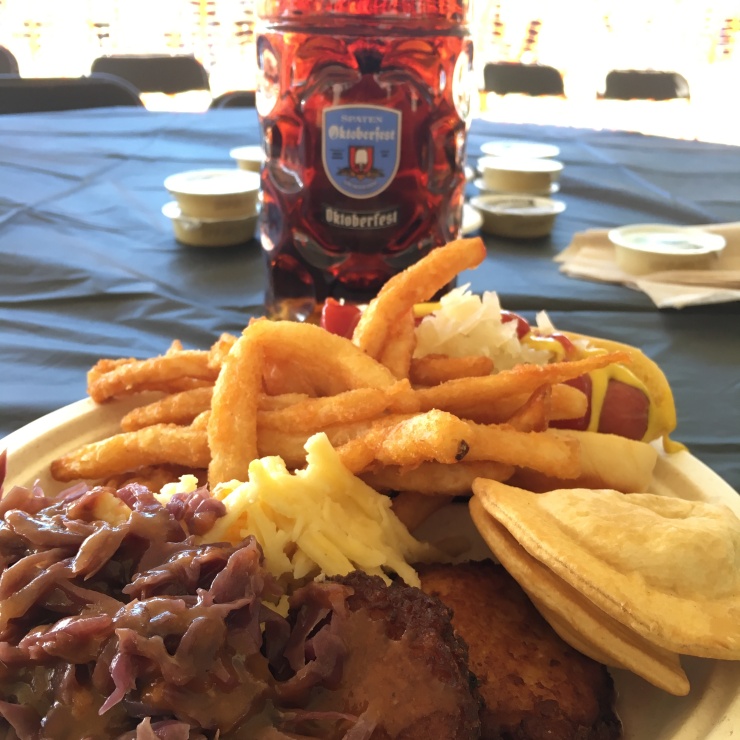 The menu at the VIP Tent was “wunderbar”! Knockwurst, bratwurst, onions & sauerkraut, potato pierogis, spätzle, red cabbage, potato pancakes, chicken tenders, french fries, and apple sauce. Everything was refillable and everything was delicious. We didn’t really get a good look at prices for these items with standard admission but if you spend all day at the festival I believe it’s worth the VIP cost because not only is the food unlimited, but so is the beer:

Brought to you by Spaten, you have 3 standard cup options: the plastic cup and two kinds of steins. Our VIP package came with the massive glass mugs shown above with unlimited refills.

Meanwhile, our tickets mentioned that you need to have them printed ahead of time because there will be no internet access onsite. They weren’t kidding! Cell signal was so dead that you really couldn’t find a single person with their phone out. I can’t begin to tell you how refreshing that was. Not only were people interacting with each other, but there were also designated areas for classic outdoor games such as Cornhole!

Walking around, you’ll discover all sorts of vendors selling snacks, souvenirs, candy, knives (?)… but we ultimately bought a bag of kettle corn. It was just the right amount of sweet and salty!

But that wasn’t the end! We finished off with dessert which happened to be included for us as well.

And of course it’s Belgian waffles! The waffle station was very well set up and executed. They offered a variety of fruit toppings, syrups, and two flavors of ice cream: pumpkin spice and vanilla. The batter was perfect and the ice cream/chocolate syrup combo was delicious over it. I can’t think of a better way to wrap up summer and kick off fall! Thanks, Oktoberfest! We’ll be back!