For almost 80 years, Topps has been producing high desirable collectible trading cards. They’re best known for their baseball cards, basketball cards, and also their non-sports cards such as Star Wars or Dr. Who.

Masterwork is one of their newer Star Wars sets and is a high-end line of cards. Some of the great collectibles you can look out for inside are the autographs (on-card & sticker), sketch cards, stamp relics, and medallions. Whereas a normal pack of cards is simply packaged with a cellophane wrapper, the Masterwork cellophane pack is additionally packaged inside a “mini-box”. And each mini-box is guaranteed at least one hit inside! Solid deal.

This year, to commemorate Episode VII: The Force Awakens, the packaging for the “Hobby Box” (containing 4 mini-boxes) features Kylo Ren.

A mini-box (5 cards) retails at $49.99, which makes a Hobby Box of 4 mini-boxes (20 cards) retail at $199.99… At a much higher price-point than standard card packs, you’ll also discover that the quality of these cards is also higher. The stock is thicker and the art is more intricate.

There was a huge backlash against Topps when this set was released because they originally promised more than just “stamp relics”. FYI, in the past, they’ve included actual authentic props encased in these Masterwork cards: Episode VI shield bunker materials, Ewok fur, sail barge canvas, and even Chewbacca hair! I’m a proud owner of “real” Chewbacca hair (signed by Peter Mayhew) & Ewok fur.

But the backlash was because Topps said they’d include pieces of the Death Star used in Episode IV. Fans and hobby stores who pre-ordered these Hobby Boxes were extremely disappointed that Topps could not deliver what they promised. However, their reason was that ever since Disney bought the rights to Lucasfilm, rules have been changing. But let’s not lose hope! Maybe in Masterwork 2017 it will finally happen. 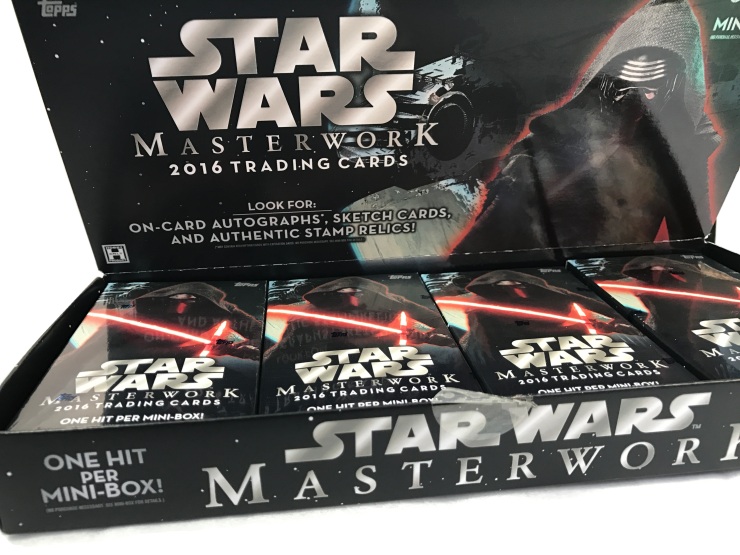 The Hobby Box is a great display piece by itself and since the cards come in the 4 mini-boxes, it makes storing them easy and pleasing to the eye too! The mini-boxes also feature Kylo Ren: 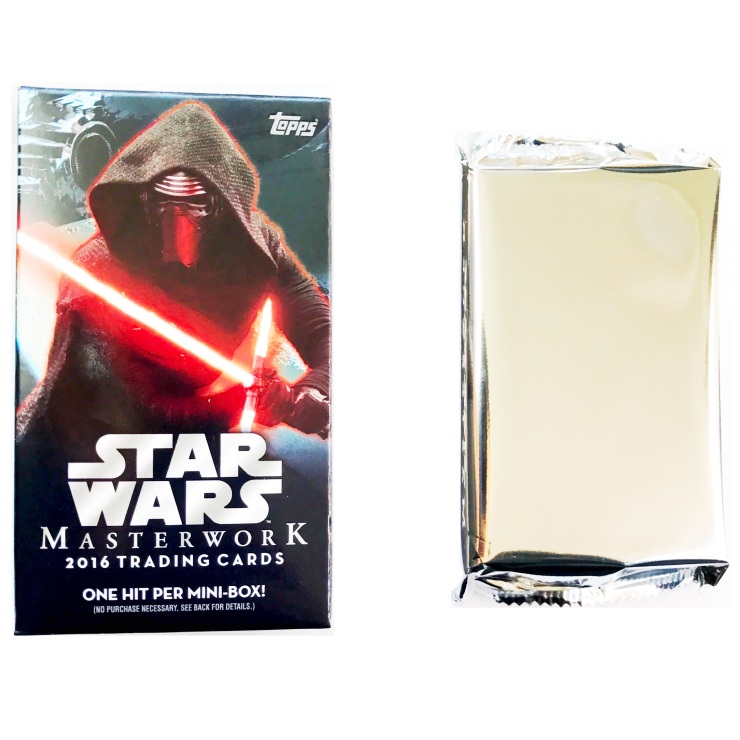 Not only does buying a Hobby Box guarantee you hits, it guarantees you at least 4 hits! That’s worth the price, in my opinion. So here we go:

Right off the bat, an amazing on-card autograph of Jeremy Bulloch as Boba Fett! Also got Padme (Queen) Amidala, Finn, Rey, and an Alien ID card for Jabba’s Skiff Guard (numbered). Things were looking up!

I didn’t have such great luck for Mini Box #2. As much as I love BB-8, I wasn’t so impressed with the medallion card of Starkiller Base & Kylo Ren. But it’s pretty funny that (SPOILER ALERT) this box would have a big chunk of the Skywalker family.

I thought this was a cool Mini Box because even though Max von Sydow’s character Lor San Tekka had very little screen time, his portrayal was fantastic. The Captain Panaka medallion/sticker autograph is also a keeper (much better than just a standard medallion). And I was able to get my Lando card signed by Billy Dee Williams himself at Rhode Island Comic Con. He took an extra minute to examine it, since it was such an unconventional item to get signed (in other words, not an action figure nor a poster).

I guess deep inside I was really hoping for a Harrison Ford autograph since those are one in a million! Or at least it certainly feels like it since (if I’m reading it correctly) he only signed 5 cards in entirety for Masterwork 2016! But Captain Rex’s on-card autograph is another great addition to my collection.

My hope is to buy some more packs of Masterwork 2016. The difference between these cards and a standard pack of Star Wars trading cards is more than 10x the cost but you can appreciate the end product so much more, even if you end up with a “base card”. I love the designs and the colors, and you can’t beat the guaranteed 1 hit per box! But keep in mind that with thicker cards, you’ll need thicker card holders. Your standard sleeves and cases won’t do in this instance.

Happy hunting and may the Force be with you!