This is our second time attending East Coast Comicon and we came back because the first time was so much fun & was a meaningful trip for us. Again at the Meadowlands Exposition Center in Secaucus, NJ, there were some great guests, vendors, and vehicles for attendees to experience.

As always, ECC had some amazing comic guests who have left their mark in comic book history: Michael Golden, Mike Zeck, John Beatty, Jim Salicrup, Marv Wolfman, Fabian Nicieza, Yanick Paquette… the list goes on and on! But I did get to meet Batman The Animated Series’ Kevin Altieri who was seated right next to Ren & Stimpy’s Bill Wray:

Kevin signed the cover of my Batman: Mask of the Phantasm VHS (yes, VHS, you read that right). He was an… interesting guy, to say the least.

But on top of all the pro comic book guests, there were tons of up & coming talent in the artist alley like my go-to favorite CreeesArt (check out the Minion-Captain America art at the end of this post). I’ve lost count of how many times I’ve seen him at cons now. But check out his work, he’s fantastic!

At first I was worried because when doors opened at 10am, he wasn’t at his booth. In fact, he didn’t arrive until after 11am. But we stuck through it! While waiting on the online queue to buy NYCC 2017 tickets, we patiently stood first in line at his booth. When he finally arrived, the energy of the place totally changed! While he was setting up his table with 8×10’s and Boba Fett trading cards, not once did he ignore the crowd. He kept telling stories, connecting with fans of all ages, and went above & beyond. I can’t say enough about Daniel!

He explained that he was late because of airport luggage mishaps and needed to go clothes shopping with his manager Saira. It was quite funny, all the while he was putting his Boba Fett helmet together for display. Then I got to talk to him about being in the low-budget “Sharknado: The 4th Awakens” film, Jeremy Bulloch (Boba Fett) & Tem Morrison (Jango Fett), how some other celebrities are just so cold towards fans, and why he’s so blessed to come to cons! Then later on (since we were first again at the photo opp) he talked to us even more! What an amazing ambassador for the Star Wars universe.

He also signed my Clone Wars Boba Fett figure and a photo of Jango & Boba I already got signed by Tem at Celebration. Plus he threw in a free selfie & signed card!

"Yep." That time I met Daniel Logan, young Boba Fett. He's so good to fans and goes the extra parsec to make your encounter bounty-ful! Here's a custom young Boba card he signed for me. #TBT

On our way out we also ran into Tony Todd from Candyman, Star Trek: TNG, the voice of Zoom on CW’s Flash, and Transformers: Revenge of the Fallen. Super nice guy! 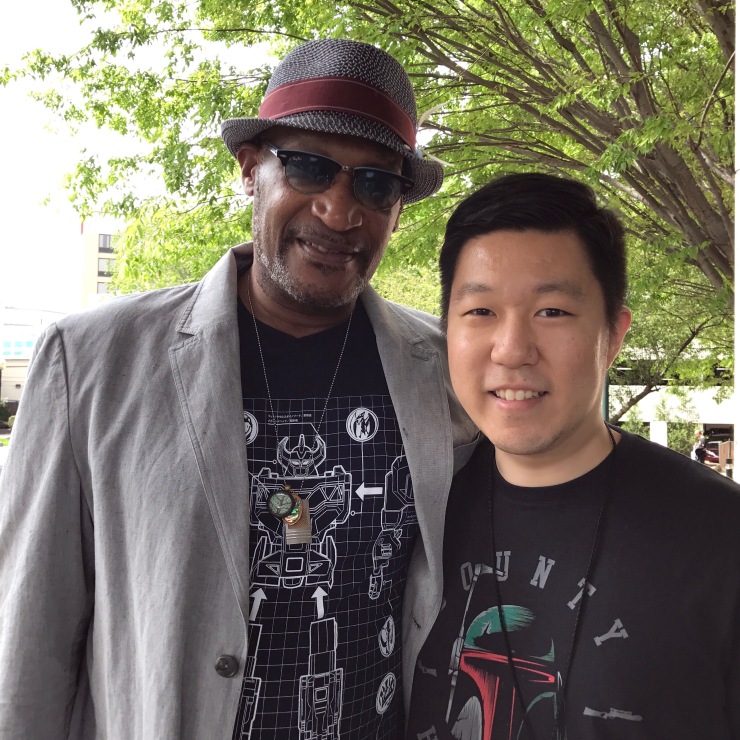 On top of the obvious booths filled with vintage & modern comic books, there are always a lot of interesting vendors at ECC. Various prints & posters, collectibles, cosplay items, etc.

With the 40th Anniversary of A New Hope coming up, I thought it would be fitting to share these cool Star Wars coasters:

And who can resist Lego mini figures!

But thanks to a little smart shopping, I was able to finally get a 6″ Black Series Sabine Wren, a cool comic book adaptation of Michael Keaton’s Batman, and more!

Another highlight from this con is the collection of vehicles they bring in. This year they had the Munster Koach, The Monkee Mobile, Christine from the Stephen King movie, the Lost In Space Chariot, the Ghostbusters Ecto-2, and 3 Batmobiles (Adam West, Michael Keaton, Christian Bale)!

On top of all of that, we did eventually score tickets to this year’s New York Comic Con online! So all in all it was a great con. Fantastic cosplay, delicious food (check out the mac & cheese bites, jalapeño poppers, and chicken nuggets below), and amazing swag haul. What more can you ask for?