Legoland Discovery Center in Yonkers, NY opened in 2013 and is run by the same company as Madame Tussauds. Located in the very fun Ridge Hill Shopping Center, this Discovery Center offers a variety of activities from rides to 4D movies. Technically all Discovery Centers and Legoland theme parks are unaffiliated with the Lego Group itself but are still home to many great Lego licenses today: Lego Star Wars, Batman, Ninjago, Duplo, Racers, etc.

I’ve always wanted to go and I wasn’t able to find sufficient information on the internet about what it’s like… so I hope this post helps someone out there! It really is a blast to visit especially with the new Ninjago section that was added just last month (April 2017). 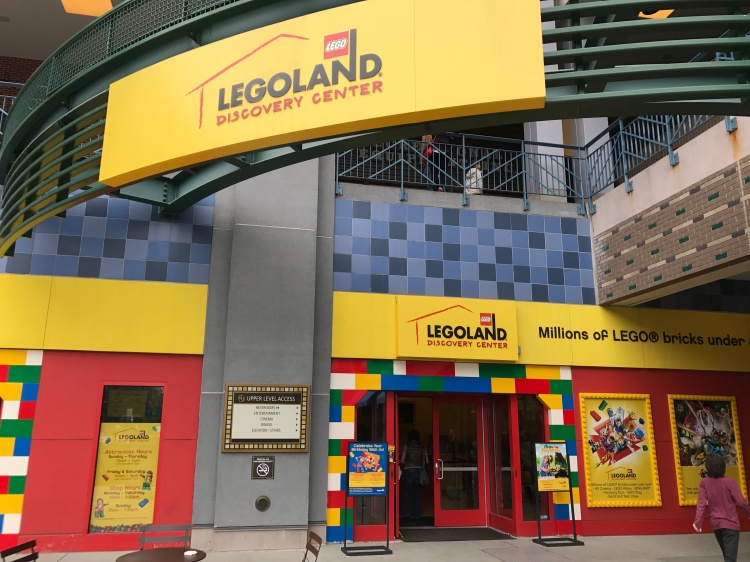 You save money by booking online so be sure to order all your tickets & extras on their website:

You can also pay ahead for a photo package (prints will be given on the day-of and the brick photo will be mailed to you) and a $4 activity lanyard which gives your child fun missions to collect stamps along the way in order to claim a prize as you exit the center (see the end of this post for the prize).

It’s important that I mention “child” because this Legoland does not allow adults to enter by themselves without children… for obvious safety reasons.

Everything inside is mostly Lego – even the frames for signage! Cash registers are covered in bricks, giant versions of minifigures are built out of Legos, and tons tons more. We start our trip with our photo package. The photographer was very friendly and directed us every step of the way. You pose in front of a green screen and later you choose which pose + background combo you like best. The package includes 2 prints, a digital copy, and a brick wall photo that gets sent to your home to be assembled later! (This post will be updated once I receive mine)

The first room contained tons of Lego history and fun facts… even a scale to convert your weight to Lego bricks! But as interesting as this room was, we were instantly drawn to the next section which was the Kingdom Quest Laser Ride! This reminded me of the Men In Black ride at Universal Studios Orlando – you sit in a roller coaster-esque car that moves as you blast your way to rescue the princess. It even keeps score! Can you guess which score is mine?

By the time you finish this ride, your photos are processed and ready for you to select the best combo. Do this before or after you visit Miniland, a replica of New York City landmarks – Fifth Ave., the Statue of Liberty, the George Washington Bridge, and so much more! It was absolutely breathtaking! 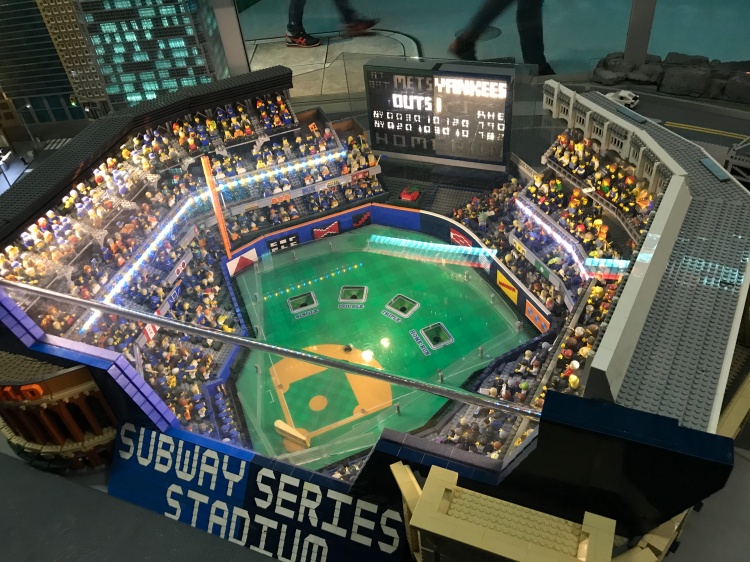 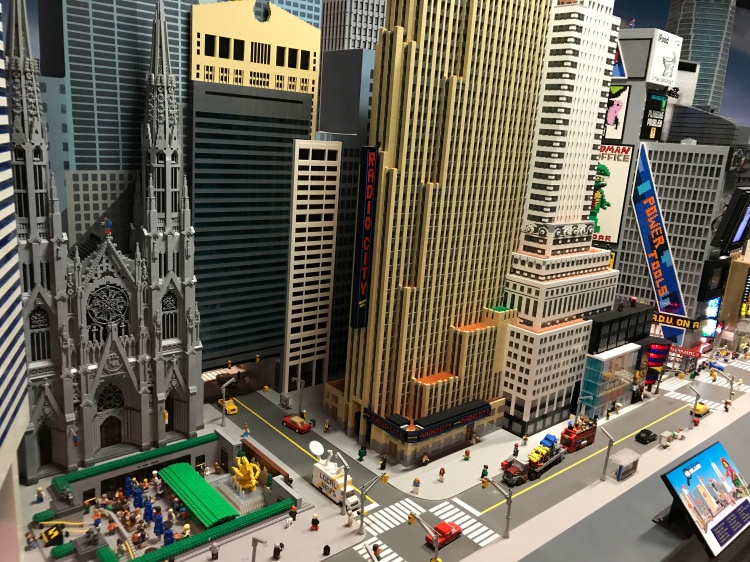 There are a lot of Easter Eggs & funny scenarios hidden all around too, so be sure to take your time before moving on to the new Ninjago section!

Ninjago City Adventure is the latest display at Legoland Discovery Center. It features a huge “ninja” playground with moving parts, nets, poles, and slide. Also featured is a giant version of Jackie Chan’s Master Wu from the upcoming Ninjago movie, a climbing wall, a color reflex test, and a giant diorama to build on (with a dragon in a den to boot)! It’s great that the new Ninjago section has a little something for every kind of kid. 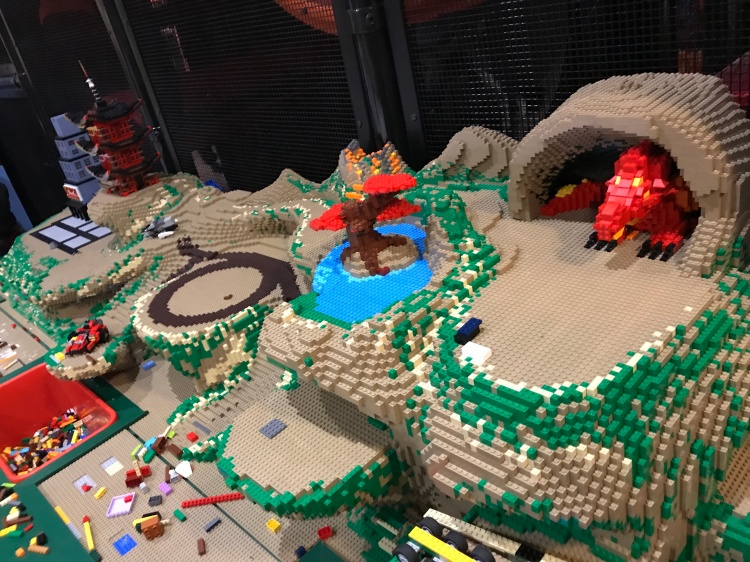 And if your child is a little too young to be running around, bumping into other kids, then maybe you should consider the much tamer Duplo Village. Just like the actual Duplo bricks, it’s harder to get hurt! A closed off section, a single slide, a giant giraffe, and they’ve replaced the balls in a ball pit with some soft Lego blocks that you can actually build with! 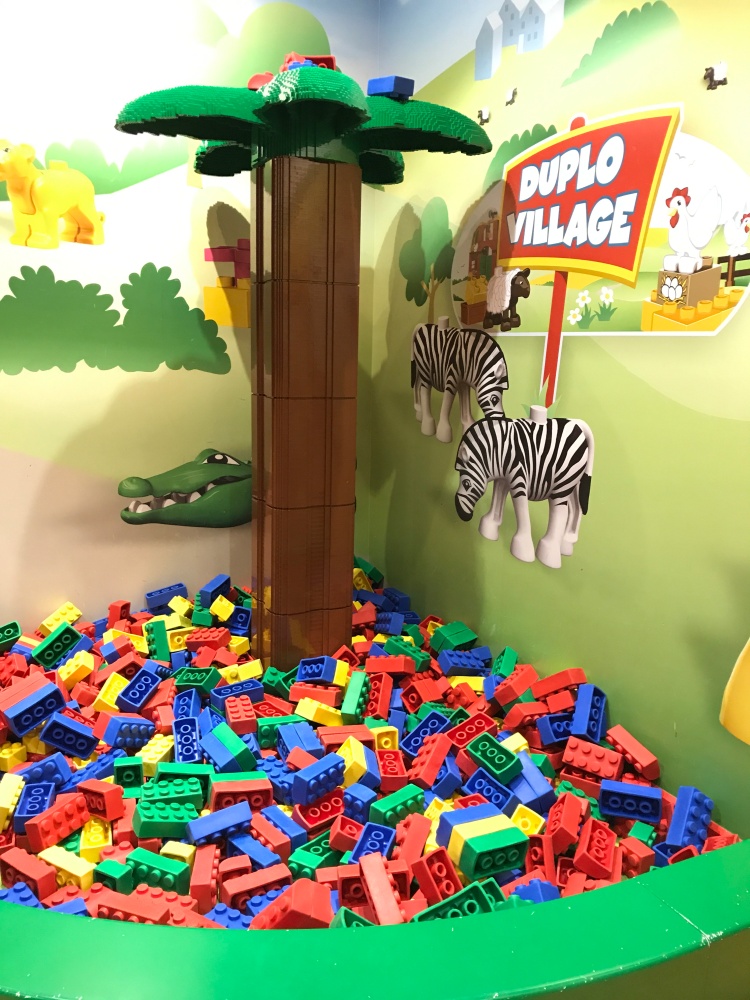 When we decided to take a short break, we were pleased to find plenty of seating at the Cafe. It’s disappointing that there aren’t any punny or clever Lego themed food names but they had everything you could need – quick bites & a variety of drinks (including coffee, moms & dads!). And check out this register! 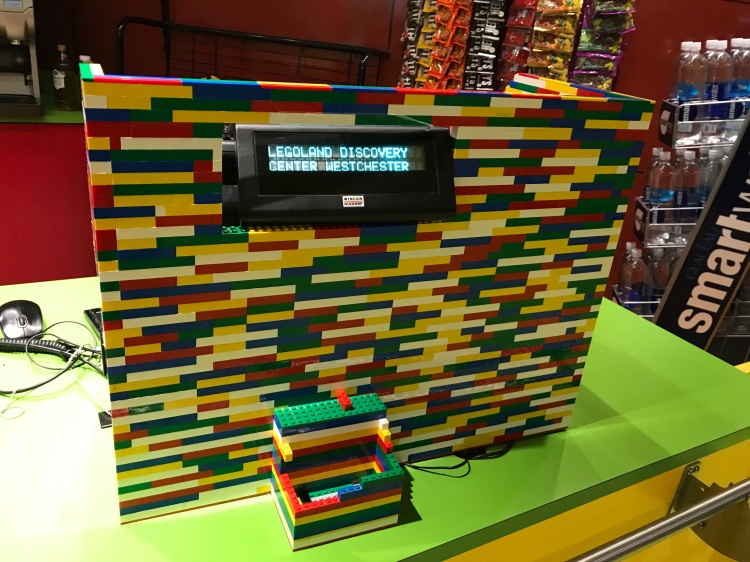 Behind the Racer section is also the bathrooms which are decorated with Lego portraits in the hallway and even Lego themed decals on the stall doors! Hilarious! 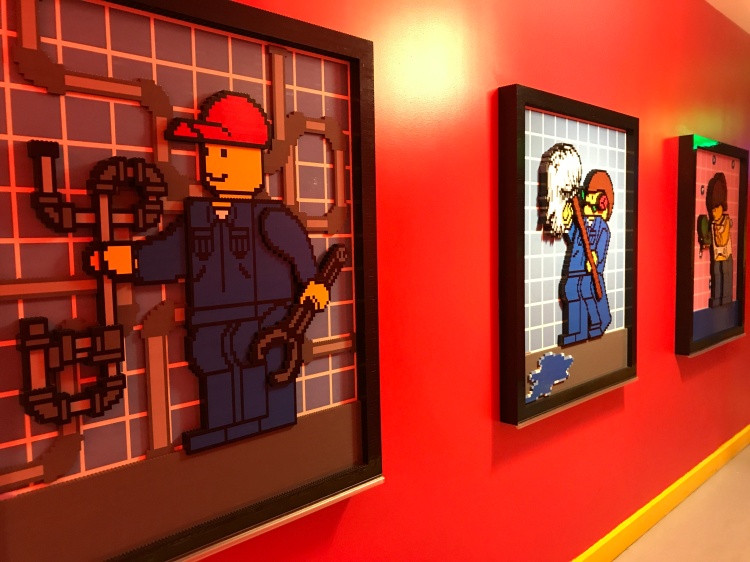 Then try your hand at building your fastest racer! Buckets of parts are available in many colors. Team up with your youngster and race to the finish line! I was honestly expecting just a simple incline to race the cars but I was surprised to see a functioning button which times a lowering gate and countdown. Very fun!

Right across from Racers and at the corner of Ninjago is an earthquake test to see if your building can withstand some shaky ground:

All the while, keep checking out the line situation for Merlin’s Apprentice Ride and the 4D Cinema. These are 2 of my favorite attractions (along with the Kingdom Quest Laser Ride). The 4D Cinema is a little dated compared to today’s modern 4D movie theater effects. Spoiler alert: the 4th dimension is simply water spraying from above for various liquid effects throughout the short film (A Clutch Powers 4-D Adventure). It was still enjoyable but if you or your family hate getting wet, I’d bring a poncho or stay out altogether.

If you have a big Lego fan, stop by the Master Builder Academy where they have scheduled lessons on building models and/or mosaics. These have specified timeslots posted on the classroom door so be sure to plan accordingly. We stopped in to check out the class but ultimately didn’t stay due to time. But the instructor was nice, and he was our first minifigure trade of the day! (If you bring minifigures to the center, you can trade with employees who have minifigures on their badges. It’s highly unlikely they will turn down your request, but it’s more likely that you’ll notice that the employees do not have any figures at all!) We traded a Frozen “friends” Kristoff for a modern policeman. Good trade and we got to see some cool art! 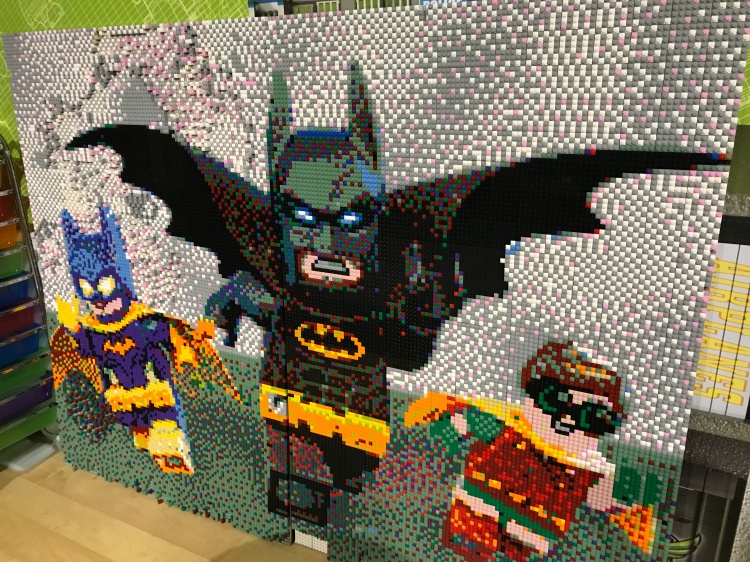 But, of course, I saved the best for last…

The Lego Star Wars Episode I: The Phantom Menace Miniland! This was an amazing display of mini Tatooine & mini Naboo… Anakin’s podrace and the Gungan battle against the Trade Federation. There’s a lifesize Lego R2-D2, Lego Star Wars videos playing on a screen, and some cool art on the wall.

Race against Sebulba with the controls or help Jar Jar mess up! 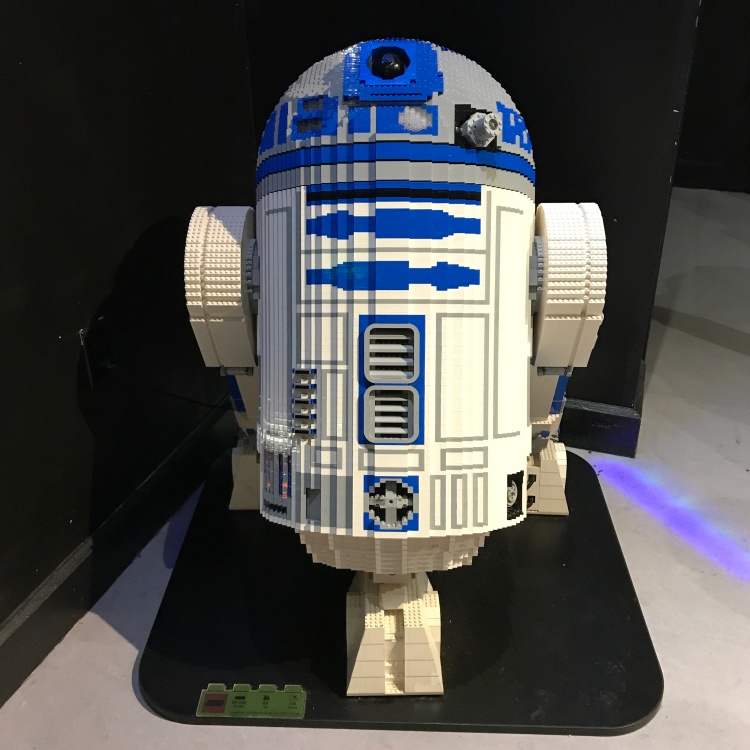 The detail in this room was absolutely incredible. So glad we finished with this setup.

But don’t worry, there’s tons more to see and photograph! You’ll find a lot of photo opportunities with Lego props & characters, some special displays, and gift options at their giant Lego Store, the machines for souvenir pennies or my preferred heavy duty souvenir token:

And on my way out I was able to trade a less favorable Nexo Knight with an employee’s new Series 17 Retro Spaceman minifigure!

All in all, Legoland Discovery Center in Westchester is a fantastic day trip especially if you love Legos. We underestimated our trip and ended up staying there for 4 hours but it only felt like 2! We walked away with some great souvenirs, a very cool exclusive Star Wars R3-M2 minifigure, one more memory on the way (the photo brick wall), and with the activity lanyard full of stamps we were able to claim a pop-out Lego Batman button! It’s a two-piece plastic button that doesn’t need a pin to attach to clothes. They have some other designs, so be sure to ask the employee for the options! 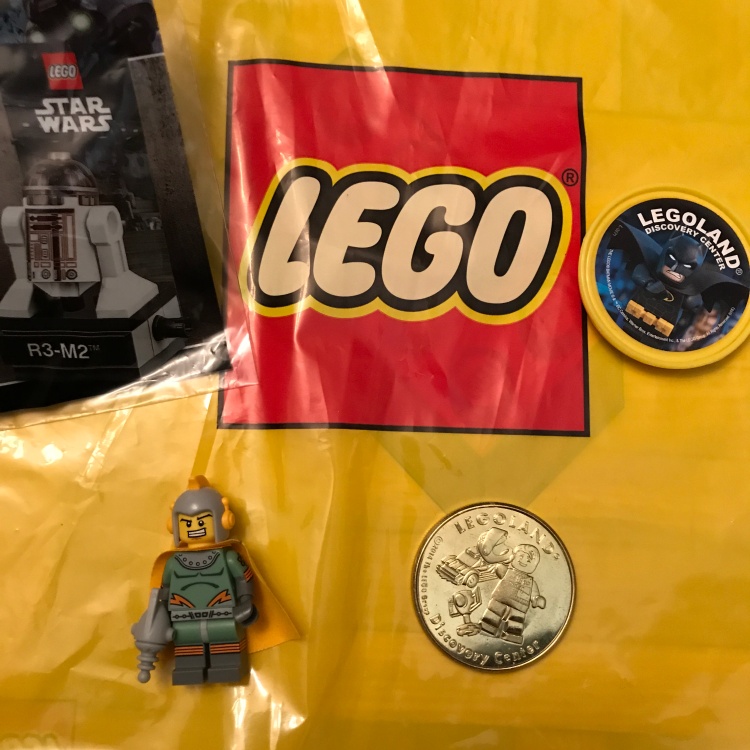 For a more in-depth look inside Legoland in Yonkers, watch the video here: