ComiCONN, “A Show For The Fans By The Fans!”, was back at Foxwoods Resort Casino on June 30 & July 1 for their 9th convention. I was able to attend and had a great time scouring the show floor, checking out various panels, and meeting celebrity guests like Robert Englund (the original Freddy Krueger), Kane Hodder (Jason), Charles Fleischer (Roger Rabbit), Tara Reid (American Pie), Matthew Wood & Mark Dodson from Star Wars, and so many more!

Even with just 2 days, the convention was packed with amazing programming consisting of panels taking up two separate rooms. Not only that, it was the perfect venue to find the latest and greatest memorabilia and comic books for every kind of collector:

Vintage books, graded books, signed books, and first appearances were just some of the vast selection of comics proudly displayed by vendors. And exhibiting artists offered a wide variety of items for ComiCONN fans, including sponsor Altered Reality’s exclusive comic books & variant covers. I was excited to be able to get a copy of Teenage Mutant Ninja Turtles / Ghostbusters 2 issue #1 signed by artists Chris Campana & Ian Nichols.

Having attended this con before, I had an idea of what to expect. But if you’ve never attended before (why not??), be sure to check out my video at the end of this post, and I hope as I go through some of these highlights, you’ll get a better a understanding as to what can be found at this amazing show!

First off, you can always find the most unique merchandise! I love finding one-of-a-kind stuff and Jackie’s Copper Creations is exactly that! These specially made copper products can be made into plaques, framed art, and even flatter prints! Plus, she can always custom design something if you don’t see the quote/logo you’re interested in! It’s definitely something I’ve never seen before and was really interested in learning more about! 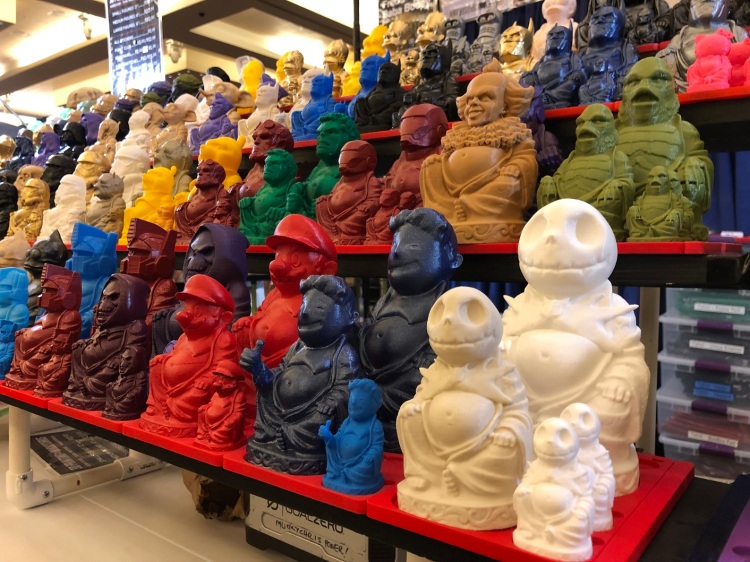 Another amazing product line is brought to you by New Jersey artist 3D Printing by Muckychris! Here we have pop culture icons sculpted as Buddha statues in various sizes & colors, including the newest addition: Jack Skellington from Tim Burton’s The Nightmare Before Christmas. He’s even got keychains, Fight Club soap bars, Star Wars Mandalorian skulls, custom light switch covers, and a melted Darth Vader helmet (watch it in the video below!)!

And because it is located at the Foxwoods Resort Casino in Connecticut, they’ve been having their very own Cake by Franck booth on display, always whipping up fun ComiCONN-themed treats. They had a Super Mario themed cake, some Pokemon macarons, and even Justice League cupcakes. Sweet!

Finally, I would be remiss not to mention all the great Star Wars merchandise for sale. Depending on the seller, you could probably find something for your collection, whether it’s vintage or modern, 3.75″ or jumbo… Which is perfect, because there were a few Star Wars guests this weekend! 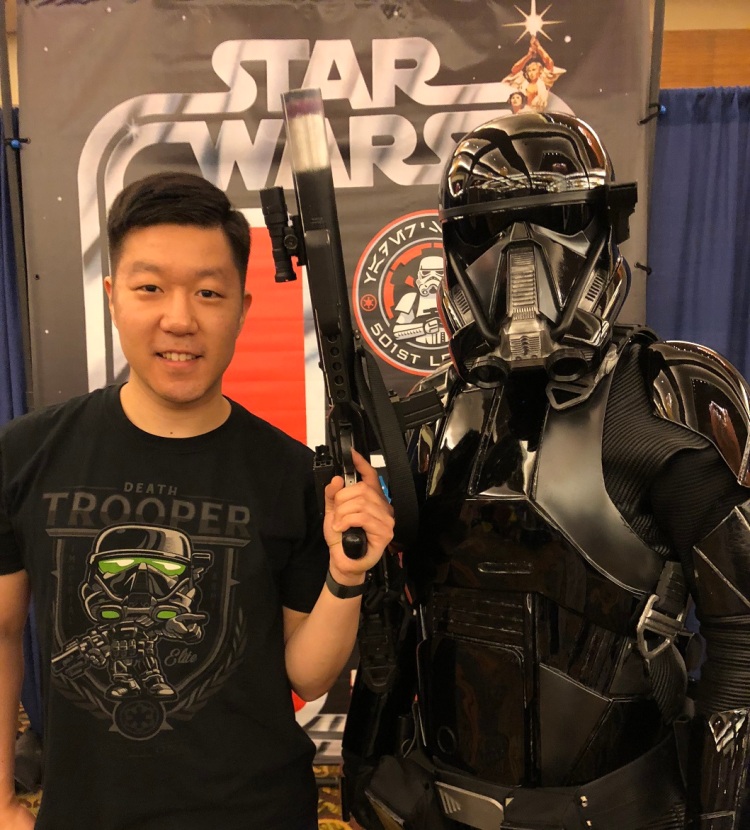 No, I’m not talking about the above Death Trooper (though the 501st Legion booth was very cool this time around) but our first guest did VOICE one in the movie Rogue One: A Star Wars Story! In fact, you may pick up his voice trickled all around the Star Wars saga, including the voice of General Grievous in Episode III: Revenge of the Sith, as well as in the cartoon Star Wars: The Clone Wars!

Matthew Wood has been at Lucasfilm & Skywalker Sound for roughly 28 years and is responsible for many of the modern iterations of Star Wars we all know today. It seems like he’s caught voice acting fever ever since Episode III and can now be heard in almost every form of Star Wars media!

He had some fantastic stories to tell while signing my items and shared even more during his panel “Far, Far Away: Talking Star Wars” with fellow Star Wars voice actor Mark Dodson, known for Return of the Jedi’s Salacious B Crumb.

Moderated by artist/podcaster Kevin Liell, it was a solid hour of great origin stories, Q&A, and good times. If you’re a fan of Star Wars and haven’t met Matthew Wood or Mark Dodson yet, be sure to see them at your next convention! They’re just fantastic! Here are some of the items I got signed by Matthew Wood, Mark Dodson, and Lance Hendriksen (some autographs I even had certified by Beckett Authentication Services on-premise): 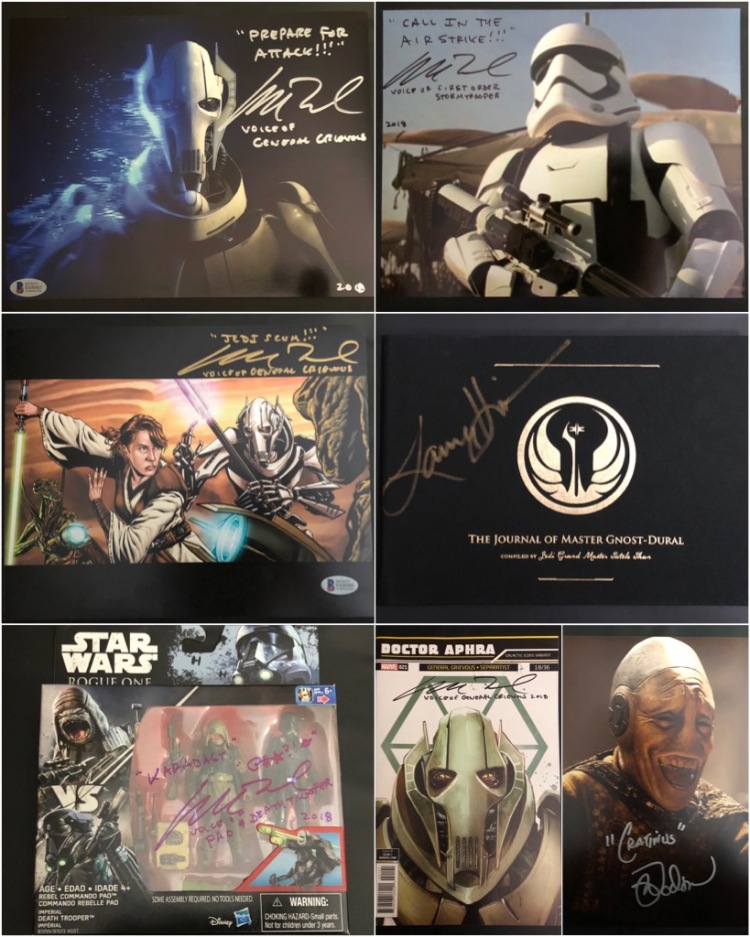 And if the celebrities, artists, and shopping weren’t already enough, ComiCONN brought in the best photo ops and cosplayers… They had the Byers living room from Stranger Things (plus a hidden Upside Down area), Freddy Krueger’s boiling room, and a screen-accurate DeLorean from Back to the Future!

Here are some of my favorite cosplayers roaming the show floor – and be sure to watch the video at the end for even more cosplayers! 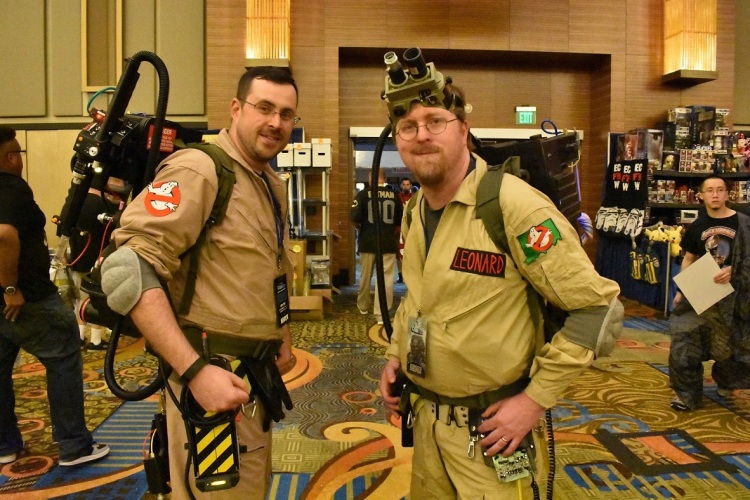 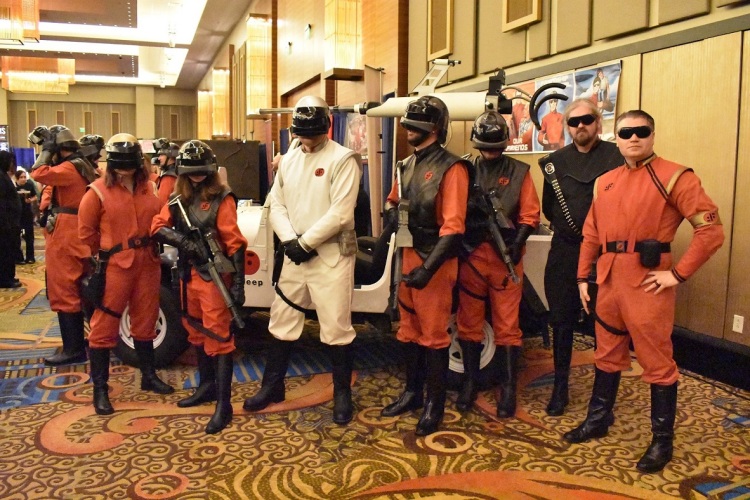 But the real surprise is the guest below. He wasn’t a cosplayer, though he might have walked right past you without you realizing!

The Mindfreak himself, Criss Angel! Criss was around because he had a limited 8-show special at Foxwoods Resort Casino, which is amazing because he rarely performs outside of Las Vegas! It had record-breaking attendance and was just wrapping up as ComiCONN was ending.

I saw him exploring the convention for a little bit with his family and he was so nice while talking to me about his career (I’m a huge fan) – and we were able to snap a pic together! You really never know who you’ll run into at ComiCONN!

ComiCONN hasn’t announced specifics for their 2019 show yet, but stay tuned with announcements from their website and for now, see what else happened in my video below: