Hey web-heads! If you still haven’t checked out the Spider-Man: Homecoming Experience, “swing” in for a chance to be a part of something spectacular! Read on to see what you can expect + a video at the end:

From June 26 to August 6 you can experience life as Spider-Man at Sony Square NYC, a special showroom in the Flatiron District which has previously been the venue for many product launch events, panels, recording artist meet & greets, and a similar exhibit for the movie “Passengers”. 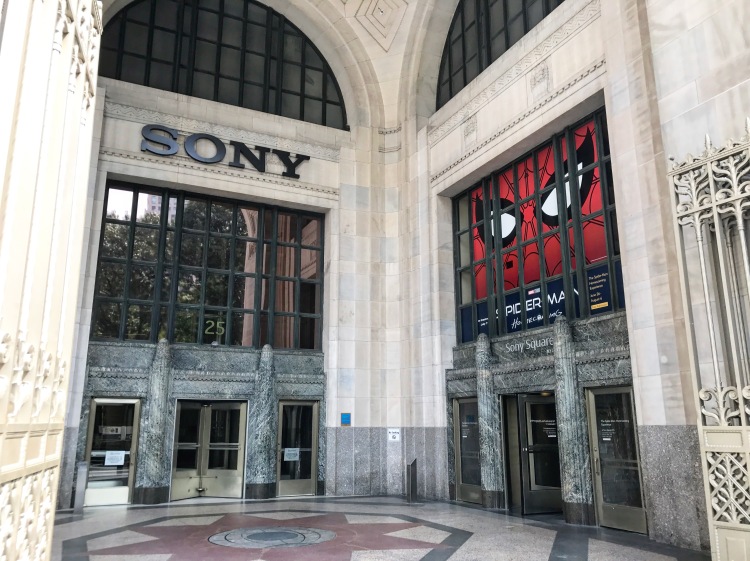 As soon as you enter through the revolving doors, brace yourself for movie concept art & designs, actual props & costumes used on set, a Sony smartphone filled with Peter Parker easter eggs (photos, videos, texts, and voicemails), and an immersive big screen experience!

We were quite lucky because our trip to Sony Square kept getting delayed week after week but once we finally arrived, we saw that this particular day was a special Spider-Man cosplay event! You’ve got your Homecoming/Civil War Spider-Man, Spider-Gwen, J. Jonah Jameson, Captain America/Spider-Man crossover, Miles Morales Spider-Man, and uh… Deadpool? 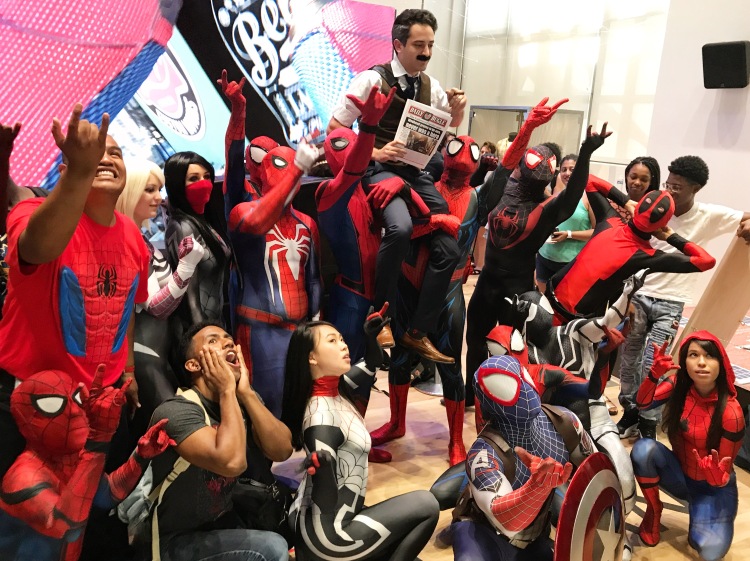 The center was still open to the public but on top of the original exhibit, Sony Square had also invited lower east side’s Ice & Vice to provide complimentary ice cream. Choose from one of two seasonal flavors: Blue/Purple (butterfly pea flower, yuzu, coconut) or Red (hibiscus rose, Swedish fish fluff), and an assortment of sprinkles. We got each flavor and paid tribute to our favorite web-slinger underneath the epic cobweb up above.

One of my favorite parts of our trip was the J. Jonah Jameson cosplayer handing out copies of his Daily Bugle which hilariously mocked the constant reboots of the franchise.

And here are some better shots of the costumes worn by Tom Holland during Homecoming:

Peter’s phone was pretty cool too. There were some special features which allowed you to access his “data” and behind the scenes fun from the movie. Two are set up in the exhibit and you can pick them up when using the interactive features such as the camera filters.

And as luck would have it, it was also the first day with the motion chairs installed for the giant screen. These two chairs are similar to those you would find in a 4D theater, capable of turning, tilting, and creating wind burst effects & rattling by your feet. You also get a set of headphones so that you get a full audio experience as well. Then sit back and enjoy some exclusive video content as Spider-Man swings through town, pitting against the Vulture, and pulls off some amazing stunts!

The video experience was a lot of fun! It totally made up for the fact that we couldn’t make it to a 4D showing of Spider-Man: Homcoming… the only thing missing was a pair of 3D glasses! And if that still isn’t enough to make you feel like Spider-Man, then climb a wall!

This was so much fun and a memorable photo op too! Channel your inner Spidey and try it for yourself!

The final elements of our visit were more comic related like an original 1962 Amazing Fantasy #15, the first appearance of Spider-Man! It was graded & slabbed by CGC (1.5). It’s totally beat up but even at a 1.5 (out of 10), it’s still worth almost $10k today! Here it is alongside Peter’s MSST shirt & backpack:

As we were leaving, we made sure to stop by Will Torres’ booth for a free sketch! Will is a great artist who was sketching Spider-Man profiles all day but decided to switch things up for me by sketching a Frank Miller-esque Batman! (You can watch the time-lapse at the end of this post.) But while he was sketching, we got to chat about his work including his original comic book co-created with Stan Lee titled, Mister Adventure, Man of Adventure.

With only a couple weeks left in the exhibit, try to check it out in person! You never know who you’ll run into!