A fairly new show brought to you by the makers of Walker Stalker Con has popped into the con scene. Calling itself a “Fan Fest”, it’s advertised that they’re going to “revolutionize the comic con landscape.” With this being the third year under their belt, Heroes & Villains Fan Fest boasts that “this is NOT your dad’s comic con. It’s YOUR fan fest!”…

This year I finally got to attend one of the HVFF events at the Meadowlands Expo Center in Secaucus, NJ – the “New York” show. I’ve been to many conventions at this expo center, so I’m very well aware of the size and potential of the show floor space. Immediately, looking at the list of vendors online I knew that it would be more heavily geared towards the celebrity meet & greets.

And when we walked in, a couple of winds around and you were already done with the vendor booths!

But it indeed was a fun convention (can I still call it that?) and for its size, they really capitalized on what can be done simultaneously. Let’s take a look!

Right after the security checkpoint, the first thing you see when you walk through the door is the Official Shop! There were a couple of prints/posters and some apparel, but nothing was really standout about the merchandise for this show. I saw a couple of people collect all their autographs on the show poster featuring John Barrowman (Arrow/Doctor Who/Torchwood), Stephen Amell (Arrow/Teenage Mutant Ninja Turtles), and Ming-Na Wen (Agents of SHIELD/Mulan/ER) but personally I felt that the celebrity-provided 8×10’s were better, if you didn’t bring your own items to get signed.

Directly next to the HVFF Shop was the main stage. I must say that, given the limited space, they did a fantastic job getting as many people in as they could with a decent sized stage + 2 screens!

And because the expo center hall isn’t too large, the sound wasn’t super echoey either.

There were people lined up for the next panel at any given time so we didn’t bother lining up because we had other plans throughout the day. But thankfully it was an open space so you were able to see & hear any panel you’d want to hover around. This is exactly what we did while eating at one of the expo center food vendors.

The Meadowlands Expo Center offers pretty much the same food for every show, but luckily it’s also nearby some great chain restaurants which are walking distance away! 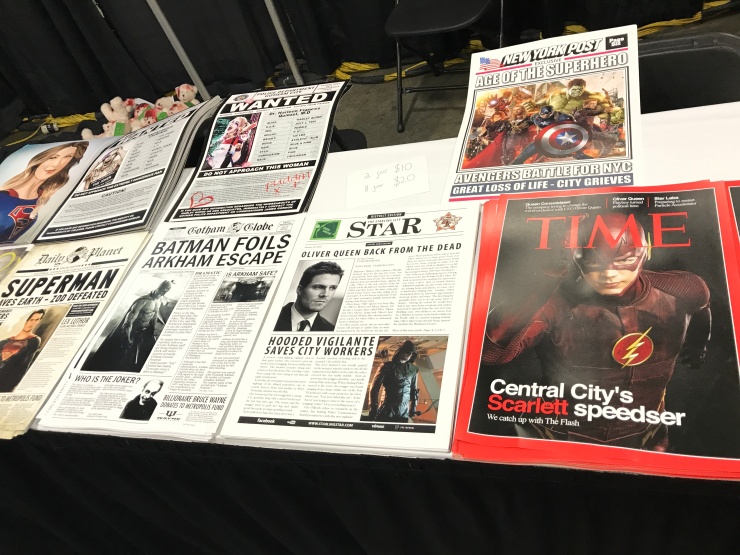 You can probably count the number of vendor booths on your two hands, but one of the cooler ones was definitely this one featuring fake wanted posters, newspaper clippings, and magazine coves of popular DC (and some Marvel) characters – many of whose actors are HVFF regulars. 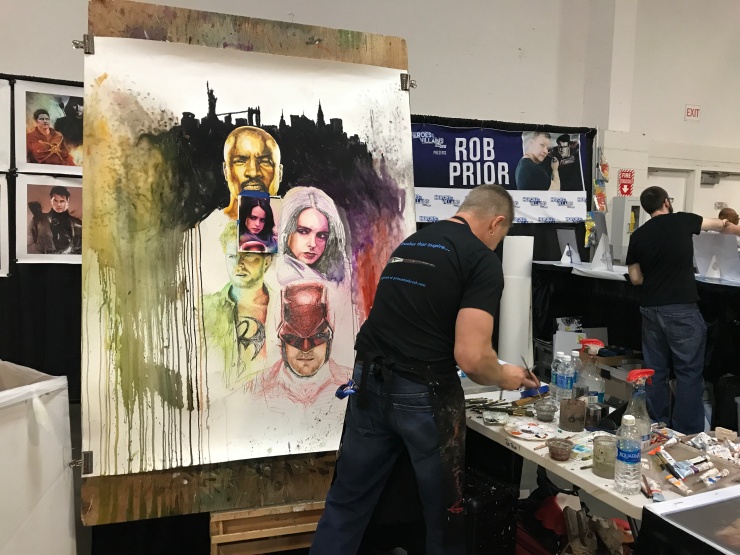 But it was really cool to see artist Rob Prior paint a few live pieces throughout the con. Here he is working on a Netflix Defenders painting.

Also along this wall were bigger participants like Saber Guild Corellia (Saber Guild’s NJ chapter of lightsaber choreography), the 501st Legion, and the Mandalorian Mercs… complete with astromech droid R4-K5, Valo Tonar, and the detainment unit we saw at Wintercon last year. 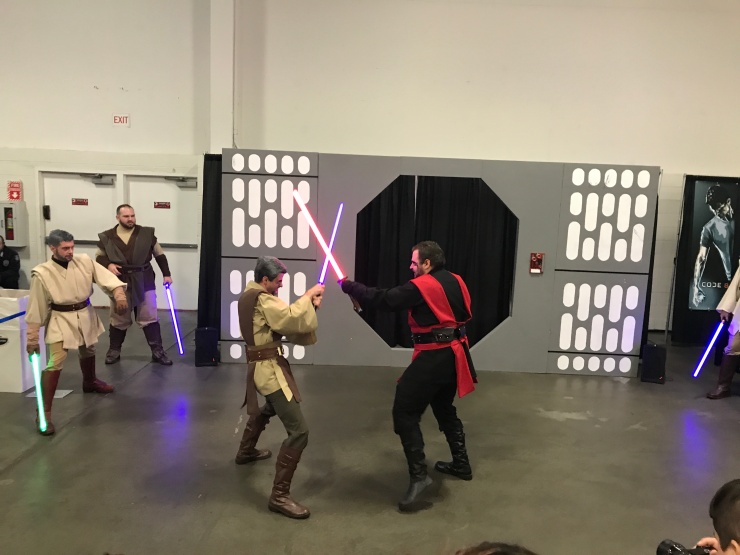 It was pretty great to see all of these things without the huge crowds they’d normally get at a “comic con”.

But it might have something to do with the demographic of this show. After all, Heroes & Villains Fan Fest mostly appeals to fans of DC TV shows like Arrow, Flash, Legends of Tomorrow, Supergirl, and Gotham… with the additional help of Agents of SHIELD, iZombie, and the occasional Walking Dead and/or Guardians of the Galaxy.

Regardless of who the actor was, all the lines were long but were moving along pretty smoothly. From what I could see, all of them were super friendly and were taking the time to talk to the fans.

Unfortunately the main person we wanted to see, Stephen Amell, had to cancel his Saturday appearance due to filming schedule. So our autograph presale was refunded and we ultimately did not get to meet him. Hopefully next year!

Brett Dalton also had to cancel his Saturday appearance last minute. The only other celebrity we wanted to meet was Brandon Routh, who we loved in Superman Returns (2006) and Scott Pilgrim vs. The World (2010) before he appeared in the Arrowverse. 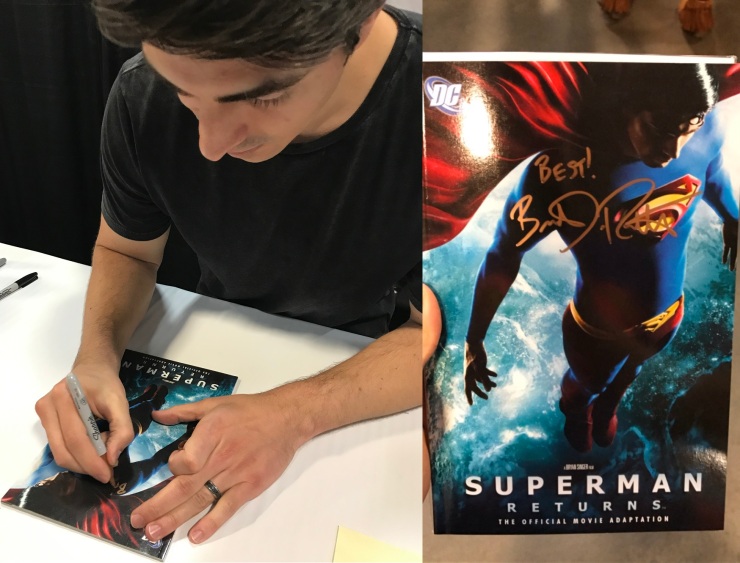 He was so nice and we got to talk about his recent Instagram posts that dealt with upcoming Legends of Tomorrow episodes. And though he had a great collection of headshots & 8×10’s from some of his projects, I brought my Superman Returns movie adaptation comic book, which he signed in gold! Came out so well.

We also got the pro photo op with him later in the day. Celeb Photo Ops was in charge of the photos and they generally do a good job. There were separate lines for each ticket tier: Premium/Gold, VIP, and General Admission. The lines moved quickly but we still had time to greet Brandon again… plus the 8×10 came out great! 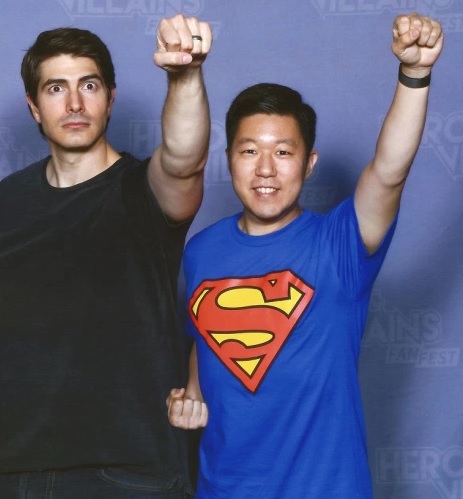 Like I said, Heroes & Villains Fan Fest is definitely for fans who mainly want to meet the stars. There’s not much else to do or see if that isn’t your cup of tea (aka your trip to the con will be ridiculously short!).

But if there’s one near you coming up (check their upcoming cities), see if there’s anyone you’d like to meet! You can simply say hi, ask for an autograph, or snap a fun photo with your favorite celebrity. Then you can laugh about it with Darth Vader and Reptar: