Play Fair is a celebration of play and entertainment for all ages. It’s an immersive, experience-rich event for children, parents, families, and teenage and adult fans. With hands-on exhibits, awe-inspiring displays, dozens of toy and entertainment brands, and never-before-seen exclusives, attendees can feel, touch, and take home their favorite toys and games — and be the first to glimpse the toys of tomorrow!

Following its first convention in 2016, Play Fair is back! Once again, the Toy Association and LeftField Media brought the latest and greatest to the Jacob K. Javits Convention Center on November 4-5, 2017 with a special Industry Preview Night on November 3. This is a fun and highly interactive con that highlights some of the best toys & games. It’s also a great place to discover up & coming brands that are just starting to get more exposure!

The weekend kicked off with a very special Play Fair presentation for the prestigious Toy Of The Year Awards, which supports the Toy Foundation in helping children in need. In attendance to present the TOTY finalists were Steve Pasierb (CEO of the Toy Association), Ken Seiter (VP of Marketing), and Richard Barry (Board of Directors and Toys R Us Merchandising Officer). 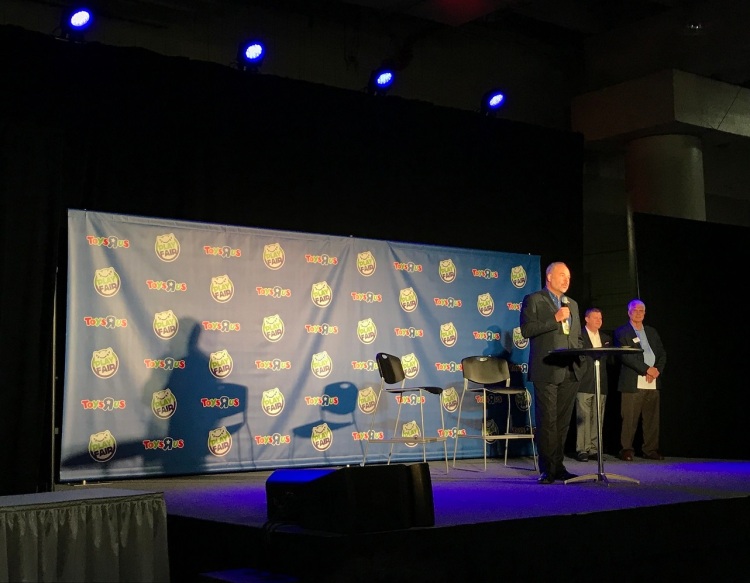 With 122 finalists in 17 categories, not only would we be able to see the toys & games but voting was open! (Polls are still open and you can cast your votes today!)

An amazing booth was revealed after the presentation so that all the finalists can be seen up close. But don’t worry, Play Fair isn’t about keeping the fun sealed up in glass cases. Tons of exciting things are always out on the floor for you and your families to enjoy firsthand! 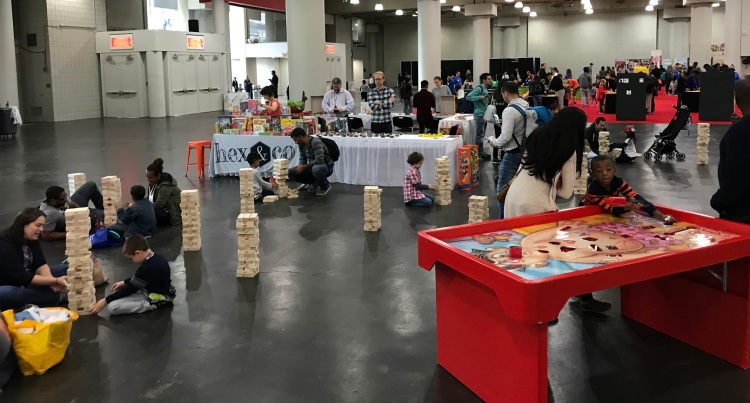 Play Fair sponsor Toys R Us had a large section called Geoffrey’s Spectacular Play Lab filled with toys, remote control vehicles, photo ops and even Geoffrey the Giraffe! (See the video at the end of this post for more)

Lego also had a big presence with activity tables… 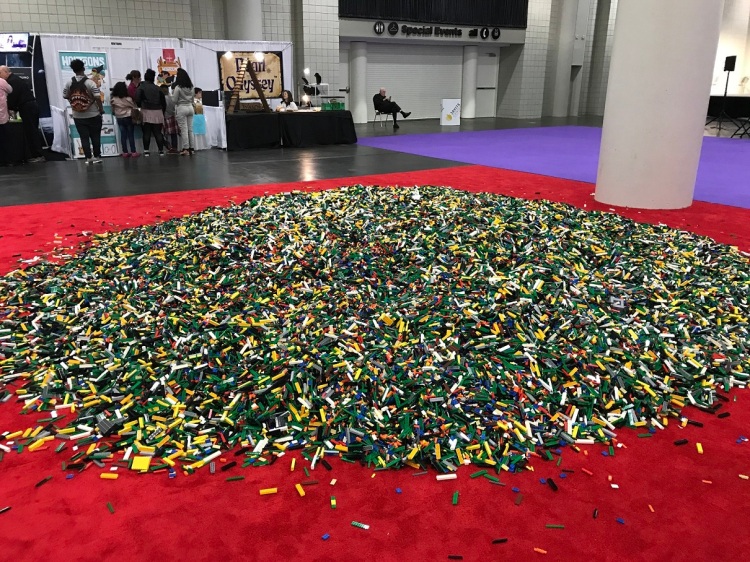 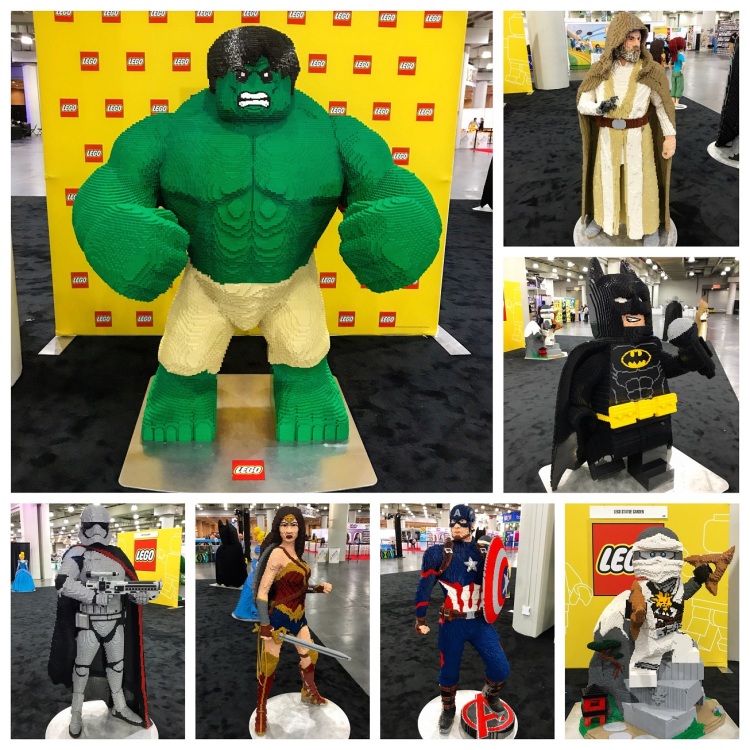 Even for its second year running, Play Fair is a good sized convention and takes up Halls 1A and 1B of the Javits Center. I had the privilege of interacting with some of the great exhibitors and vendors during the show:

Learning Lab 360 is a traveling VR company to partner with schools to teach interactively through Virtual Reality. They had one of the longest lines at Play Fair this weekend, demoing Minecraft inside their trailer. It was my first time playing Minecraft and not only was it pretty fun, it was educational talking to the staff about what they do to help teach students!

City Girls by The New York Doll Collection is comprised of 5 girls from all 5 boroughs of New York City. Each girl has a different look and style. You can even follow along with their adventures online. These 18-inch dolls are a great introduction to accessorizing and even collecting. And for a limited time, save 10% off your order with code TF2017 (expires 11/12/17).

Stick Together is a wonderful way to make mosaics come to life! These puzzle posters use lettered stickers that correspond with a color in order to create a beautiful masterpiece. At Play Fair, they had a demo set up so that attendees can collectively help build a large mosaic. But at home, these posters are foldable and can even be custom ordered online to make for a perfect holiday or birthday gift! 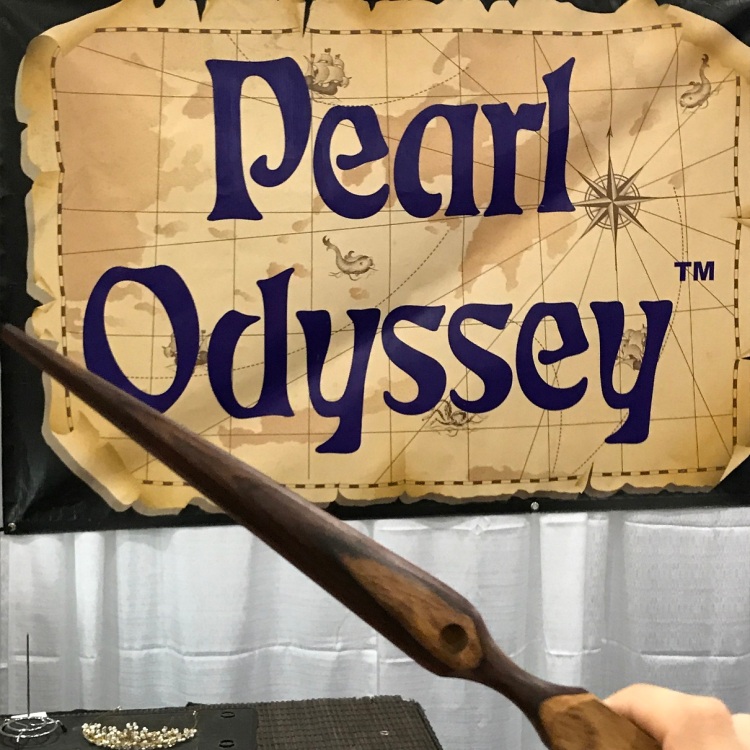 Pearl Odyssey was another vendor that caught my eye. Offering live oyster openings, Pearl Odyssey is a strictly convention-only exhibitor that creates on-the-spot jewelry and wands. You can choose from a variety of accessories such as pendants, earrings, rings… and a number of woods for the wands. Very cool!

There were also many game creators present but Magnets The Game is one that I can get behind. Calling itself the “Marbles of the 21st Century”, Magnets is simple fun that didn’t take 10 minutes to explain like some of the other new games at Play Fair. I also appreciated that as you collect magnets to win, the game doesn’t just end if a player runs out of magnets. Instead, they’re shared so that the game can continue! For more info, visit their website.

In addition to vendors, all around the show floor were photo ops and many interactive stations. Sidewalk chalkboard artist Eric M. Maruscak of Pepper Ink was at the Funimation booth drawing an epic Dragon Ball display:

Imagine by Rubie’s, a division of Rubie’s Costume, had very cool statues of Batman, Wonder Woman, Superman, Iron Man, Thor, and Darth Vader… along with a collection of costumes for kids, adults, and even pets! 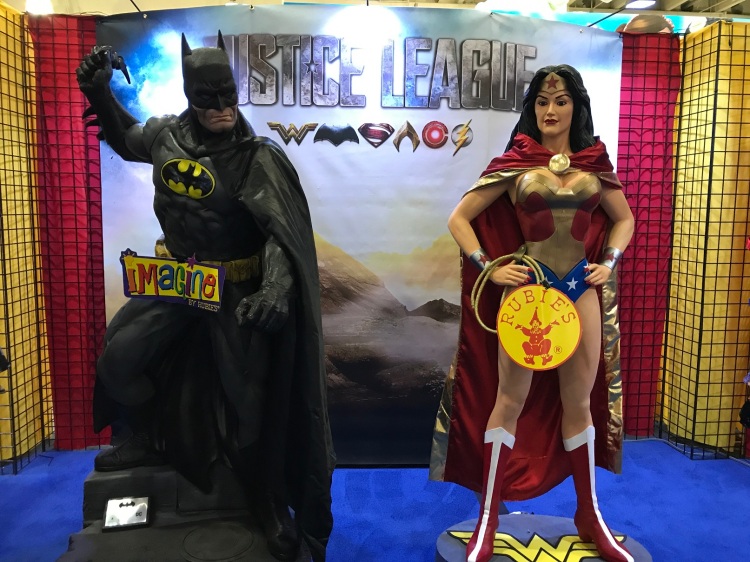 Although the 501st Legion wasn’t to be seen, Empire Saber Guild was proud to pose for photos, present live demonstrations, build sabers with kids, and even hand out fun collectibles like trading cards, Topps Galactic Connexions, and kyber crystals! But one of the coolest parts of their booth was the new Lenovo Star Wars: Jedi Challenges game featuring an AR headset and lightsaber remote. 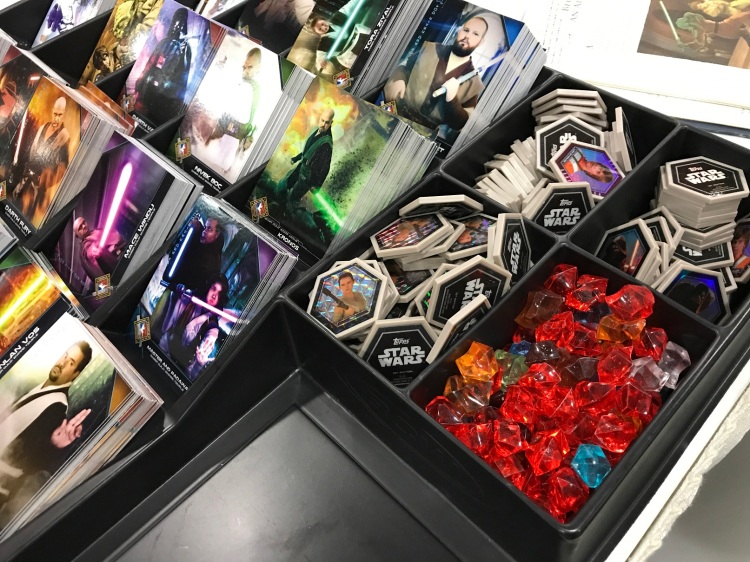 But the most noteworthy event of the entire convention was the mammoth achievement by Maddie Rae and her fans to make Guinness World Record live at Play Fair!

This pool of a purple mess was created by many helping hands along with Maddie Rae to officially be the largest slime recorded! I got to interview the official Guinness rep and not only did they reach the 11,023.11 lbs. minimum (5,000 kg), they broke it! They officially hit 13,820 lbs. which is nearly the weight of an average tyrannosaurus rex! (What did they do with all that slime? Half was given out as souvenirs and the rest will be sold online with proceeds going to Hand in Hand, a hurricane relief charity.)

It was an awesome weekend at Play Fair and I highly recommend checking it out next year, November 3-4, 2018! It doesn’t get super crowded and there’s plenty of fun to go around! Be sure to check out my video below for everything I didn’t mention here: