#IFoundLegoLuke and won Lego R2-D2! Sounds like a pretty good deal, doesn’t it?

The brick-y Jedi Master in exile debuted at San Diego Comic Con 2017 (July 20-23, 2017) and then embarked on a tour of 5 Wal-Mart’s across the country! At 6 feet tall, this Lego statue is taller than Mark Hamill himself… Aren’t you a little tall to be a Stormtrooper?

The signage encouraged you to “Pose with Luke!” so that’s exactly what I did. Some normal poses and a couple silly ones – like me handing him a banana in the style of Rey handing him the lightsaber in Episodes VII & VIII… Hey, a Jedi’s gotta have a balanced diet too!

That’s when I saw the signage for this contest. It was a very unassuming sign with little to no information. All I knew was that (a) it’s custom made, (b) it’s actually from the LEGO Group, and (c) it’s Star Wars! So I entered.

Fast forward 2 months and, to my surprise, I received the notification that I was chosen as the winner! Fast forward another month and he finally arrives… the mysterious R2-D2 that I still know nothing about.

I’ll be honest, I was a little skeptical at first. Not because I won the contest but because no one could tell me what a “custom brick built Lego R2-D2” would be. How big is it? Is it pre-built? Will it do anything or just stand there? 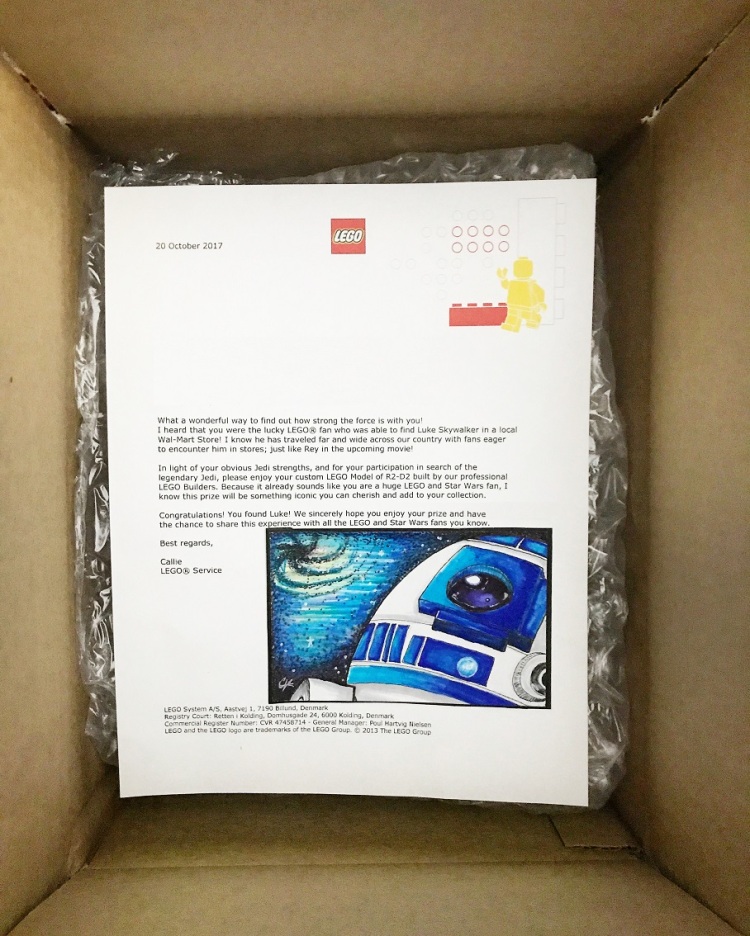 I opened the box and inside was a hand-drawn R2-D2 card and this personalized letter to me. I’ve whited out some parts for security reasons but it says:

What a wonderful way to find out how strong the force is with you! I heard that you were the lucky LEGO fan who was able to find Luke Skywalker in a local Wal-Mart Store! I know he has traveled far and wide across our country with fans eager to encounter him in stores; just like Rey in the upcoming movie!

In light of your obvious Jedi strengths, and for your participation in search of the legendary Jedi, please enjoy your custom LEGO Model of R2-D2 built by our professional LEGO Builders. Because it already sounds like you are a huge LEGO and Star Wars fan, I know this prize will be something iconic you can cherish and add to your collection.

Congratulations! You found Luke! We sincerely hope you enjoy your prize and have the chance to share this experience with all the LEGO and Star Wars fans you know.

You got that right! So here he is inside the box: 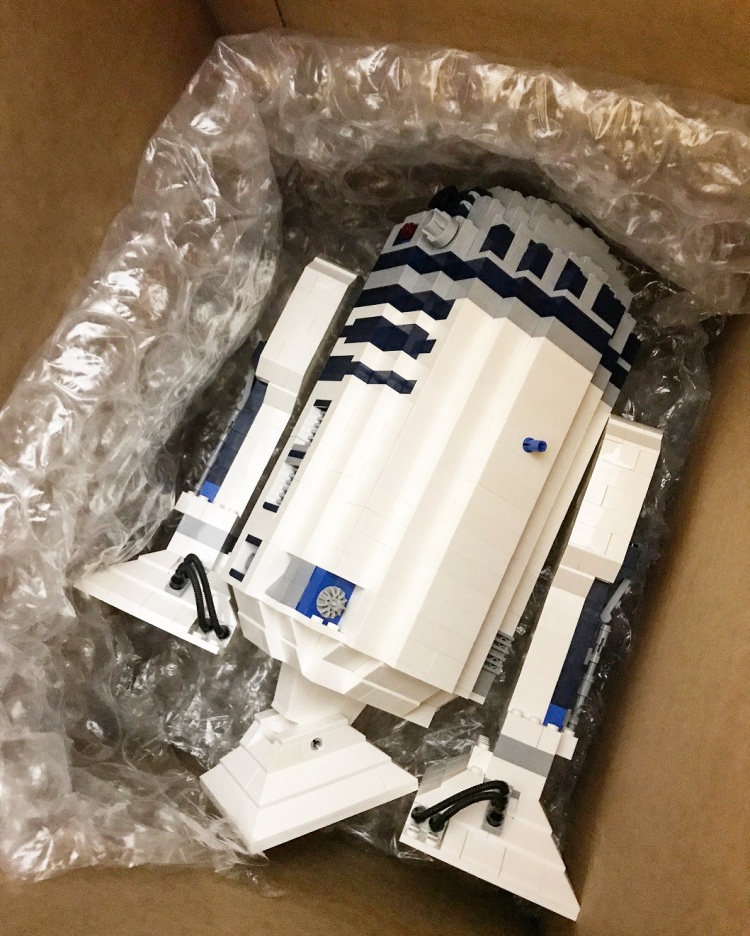 If you’re familiar enough with Legos, you can see that little assembly was required. His middle leg is already attached, so all I had to do was attach his 2 main legs!

He’s just over a foot tall, once he’s leaned back like this. The contest rules state that the value of this one-of-a-kind Lego R2-D2 is around $2,000 but I’ll go ahead and say that this whole experience was priceless!

In hindsight, I was pretty lucky to even find out about this contest because I found Lego Luke on the last day he was at my Wal-Mart! Huge thank you to Lego & Wal-Mart for everything!

Last week I got to meet Lego Luke again at Play Fair 2017 and thanked him too. If you haven’t seen him yet, check out my Play Fair post and also the official Lego time lapse video of building him with 36,743 bricks:

The Force manifests in many ways… Watch how the 6ft Luke Skywalker was built from 36,743 LEGO bricks in 277 hours! 😮 #LEGOStarWars @starwars pic.twitter.com/RnTandohFj