Following the great time I had at Rhode Island Comic Con last year, I decided to attend the “The Biggest Show In The Smallest State” again!

While last year’s RICC had it’s ups & downs, it was still a well-put-together event given its venue restrictions. And even though some of its faults carried over into this year, it was still jam packed with amazing guests, fun panels, and cool vendors (feel free to peruse last year’s post to supplement the look & feel of RICC). Let’s photographically travel to Providence, RI together: 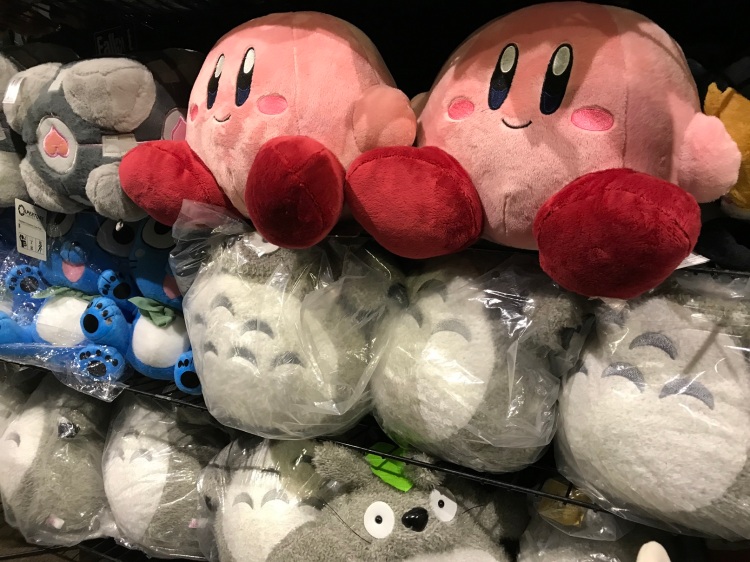 Of course there were many vendors who had the latest collectibles, ranging from plushies to statuettes, from cards to comics.

The art was also amazing this year. New techniques are becoming very popular trends… Maybe it’s because of the influence of DC’s recent “Metal” series, but the metal art I saw at NYCC a couple years ago has now blown up to a whole new level! At RICC not only did I see metal prints but also metal trading cards, poster sizes, and even Michael Golden (co-creator of Rogue & Bucky O’Hare) is upping his booth with 3D/lenticular prints. (I was yelled at for trying to take photos/videos of them…)

3D printing has also started to become a dime a dozen.

The more and more I attend cons, the more vendors I see creating 3D printed props and figures. This Baby Groot took many hours to print but you can tell that given its size, the printer is creating him in high detail!

Even the 501st Legion got in on the action with a life size 3D printed K-2SO!

This year, the 501st had an amazing section upstairs in the Rhode Island Convention Center. In addition to their costume/helmet gallery & R2 Builders Club, they put up an Endor Shield Bunker & speeder bike for photo ops. And of course, fully costumed 501st members were present. (Check out my video at the end for more)

I scoped the tables, picked up a few 501st trading cards that I didn’t have yet, and made my way over to Scarif again where I ran into Cassian. We almost got the Death Star plans out of there but an Imperial surveillance unit caught us in the act!

I saw a lot of great cosplay at the con, including a Spider-Man Homecoming version of Vulture. Check him out in the video below! (I think he had to check his wings in at the door!)

There was also a life-size Gal Gadot Wonder Woman statue on sale at FYE. It’s a lot more convincing than their previous Batman, Harley Quinn, and Deadpool statues.

With their third season done, I recently binge watched all 3 seasons for the first time. This allowed me to actually get all the references around the con, including artists appealing to the ever-growing Rick & Morty fanbase: 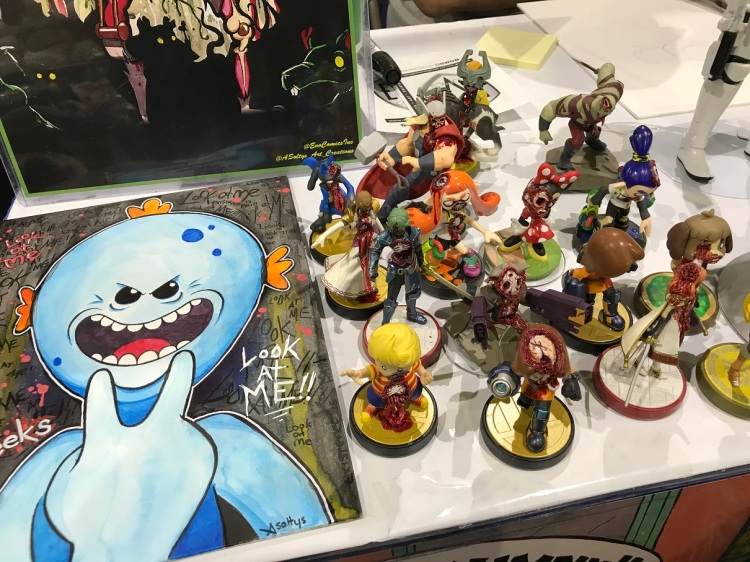 In particular, Adam Soltys‘ table caught my eye with my favorite Rick & Morty charcter: Mr. Meeseeks (look at me!)! In addition to prints & t-shirts, Adam also had his zombified Disney Infinity and Nintendo amiibo figures.

Check out some of his designs, including Super Saiyan Rick: 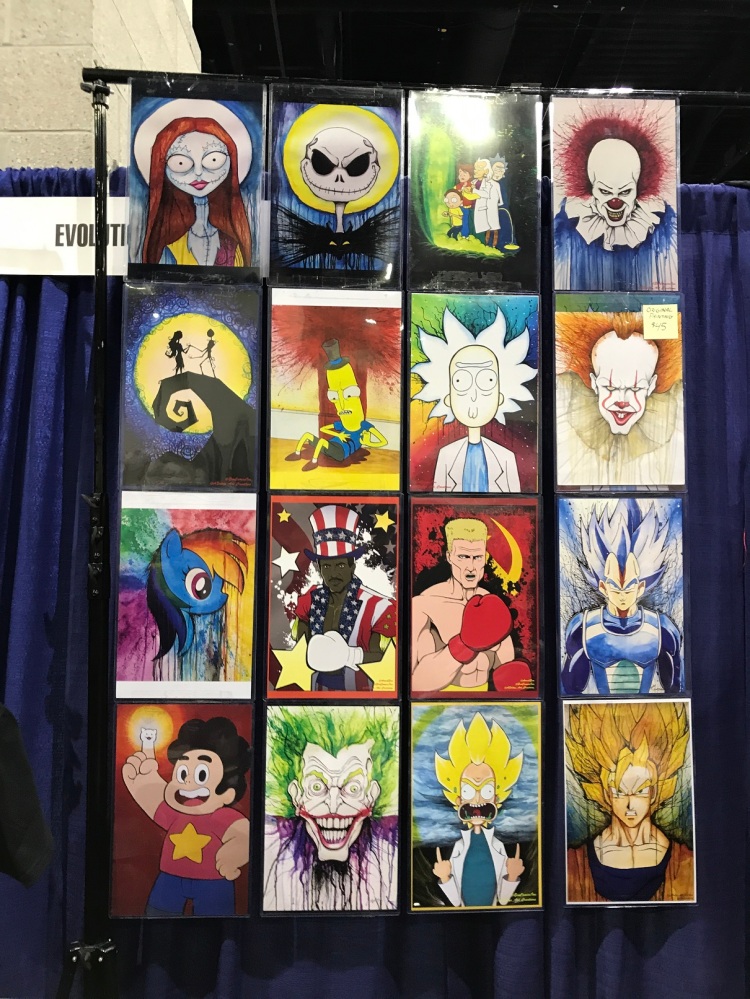 Unfortunately, meeting Rick & Morty creator Justin Roiland was no easy task. (We’re talking about 2 hours on a line to meet him…) Rhode Island Comic Con estimated about 100,000 attendees over the course of the weekend, and with last minute cancellations from many guests such as The Walking Dead cast, Mark Ruffalo, Val Kilmer, Jon Bernthal, and Freddie Prinze Jr., many fans were upset and had to “settle” for the remaining guests. My guess is that the long lines are due to the fact that TWD fans had to resort to their second, third, and fourth choices for meet & greets.

But I did manage to find time to meet some of the people I planned on meeting:

Paul Reubens, aka Pee-Wee Herman, was such a nice guy! The line was moving slowly but it was worth it because he spent time talking to each fan, getting to know them, and even asking what they do for a living. The guy in front of me must have had an interesting job because Paul asked his assistant to continue interviewing him! When it came to my turn, we talked about Pee-Wee (of course), his voice as RX-24 in the Disney ride Star Tours (and how he reprised the role in the Star Wars Rebels cartoon), and his role in Gotham.

I’m not a fan of getting my autographs personalized, so when I handed over my Pee-Wee comic and RX-24 figures he jokingly asked, “Are you going to sell these?!” We laughed and continued our conversation. The book above and the one below for Weird Al are currently on their way to CGC! 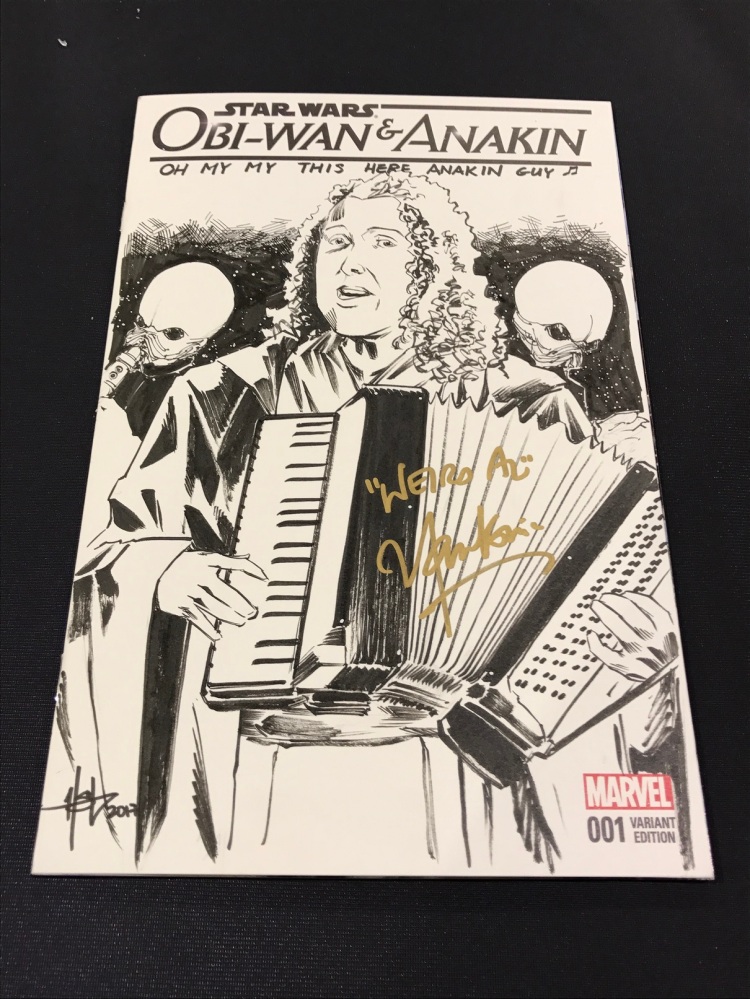 If you’re just tuning in, I got this Obi-Wan & Anakin #1 comic sketched by Creees a few months ago at Garden State Comic Fest. Hoping to meet Weird Al at RICC, I asked Creees to draw Al in his Saga Begins attire (a la live performance) along with the first line of the chorus. It was perfect! Be sure to check out more of Creees’ art if you’re interested in prints or commissions!

When I showed Al, he was in awe and wanted to snap a photo of it on his phone before he signed it for me.

The funny thing about Weird Al’s booth was that instead of being a table out in the open like the other Headliners, he had a closed off booth which was accessible through a curtained entrance. I felt like I was lining up to meet a fortune teller or the Wizard of Oz! Upon entering, I exclaimed “Hey, they told me Spatula City would be behind the curtain!” (A reference to his 1989 movie “UHF“)

So glad I got to meet him though. Growing up, Weird Al was an influence on me in many areas: musical genres, pop culture references, humor, and even his fashion (just kidding!)!

We talked about his VH1 Behind The Music special and how my friend lost my VHS recording of it… The “Remastered” version on YouTube just isn’t the same. Unfortunately he couldn’t help me there!

The third book I’m sending to CGC is my first Neal Adams signature:

If you know Neal Adams, then you probably know Deadman, and vice versa!

This is a highly anticipated comic book series that just launched two weeks ago. Above is the glow in the dark variant cover. I was lucky enough to grab one from my local comic book shop before they sold out!

Neal explained why he signed at the bottom of the cover: the raised glow in the dark lines repel the marker ink! He said he ruined two books earlier because he didn’t know this. Glad mine wasn’t a guinea pig!

Lastly, I was able to meet the new Chewbacca actor, Joonas Suotamo:

Joonas is a Finnish basketball player turned actor. He played Chewie alongside Peter Mayhew in The Force Awakens. He’ll do the same for this year’s The Last Jedi. And he’ll be the sole actor as our favorite Wookiee in next year’s Han Solo movie!

I did have to wait a few minutes though because one of those “autograph service” companies had just stepped in line ahead of me. They had stacks and stacks of items to be signed with Post-it’s indicating where Joonas should sign… and with what color. Insanity!

But I absolutely love the way he signs his name, incorporating a little Chewbacca face into his autograph. I told him it looked a lot like the Chewbacca Dog, and he said that Chewbacca Dog is his favorite picture!

All in all, Rhode Island Comic Con is still one of my favorite conventions because they don’t skimp out on the celebrity guests. Navigation is still something that can be improved, but was definitely better this year than 2016. I do feel bad for the fans who bought tickets just for 1 star who ended up canceling, but unfortunately that’s to be expected once in a while from any comic con. But even if that happens, walk around the show floor! There are always amazing artists, actors in roles you never realized before, or a collectible you never knew existed! 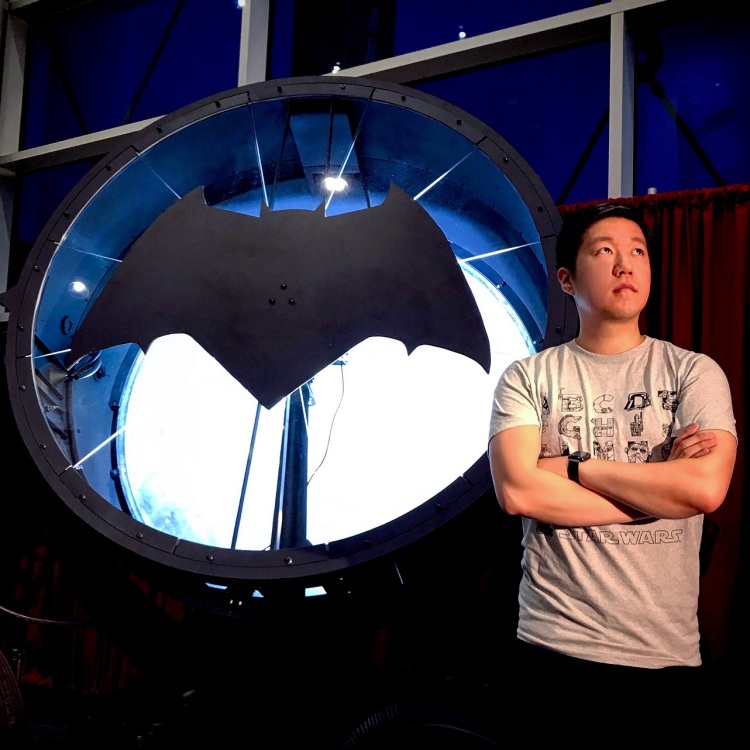 Until next time, RICC! You know how to get in touch with me…