I was fortunate enough to attend the TITANS World Premiere in New York City on October 3, 2018 with the cast, producers, and other lucky fans.

Ever since the first trailer stirred up some controversy at San Diego Comic Con, the internet has been filled with mixed feelings & expectations. But after viewing the first 2 episodes of the show, I’m officially subscribed to DC’s web service DC Universe and pumped for TITANS! 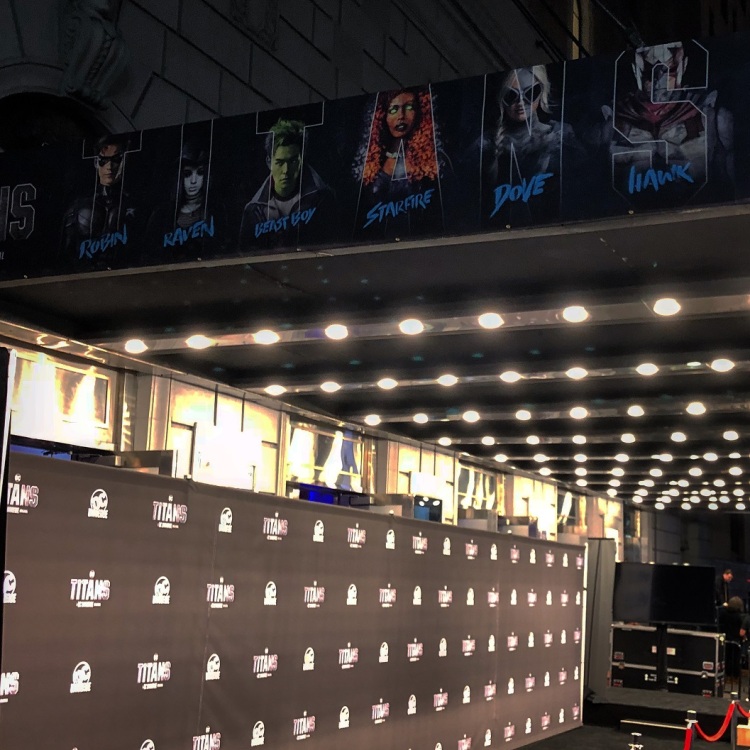 The red carpet was a spectacle and walking into the Hammerstein Ballroom was great as always. It was an energy I wasn’t really expecting because of said skepticism of the show. Nevertheless, fans cheered as the evening began.

But before we got to TITANS, some special guests appeared…

Brendan Fraser had a little help from Matt Bomer to set up another DC Universe show, Doom Patrol. I don’t know how to describe the feeling of “edge of your seat” but I felt it all around the room. They even showed us a teaser after the TITANS screening, but that’s later…

Because here comes another unexpected surprise as Kaley Cuoco introduces a new animated series, Harley Quinn, who she’ll be voicing:

The trailer was well received by the audience and personally I really enjoyed Kaley’s voice as Harley Quinn – it was “Harley” enough without trying to sound like the Batman The Animated Series voice. Can’t wait for this show!

But the moment we were all waiting for… We all attended expecting an episode of TITANS but as a special treat, we were able to experience both Episode 1 (“Titans”) and Episode 2 (“Hawk and Dove”)!

I’ll say this: the trailer for TITANS does not do it justice! This show is equal parts gritty/dark, funny/clever, and good storytelling. I really enjoyed Brenton Thwaites as Robin (Dick Grayson). And since these first two episodes were introductory, we don’t see the Titans forming just yet but we do see how they each use or discover their powers.

The chemistry was very good and I can’t wait for them to form up later in the season! And because it’s rated TV-MA, the action is intense and the language, at times, is brutal. But that’s what makes TITANS stand apart from other superhero TV shows – regardless if it’s DC or Marvel. It really pushes the envelope in that regard.

The little easter eggs throughout the episodes were nice too. If you’re a DC Comics fan, you’ll appreciate a lot of them. Plus, it’s fun to see that this DC universe is somehow intertwined with ours (they have Game of Thrones too!).

Afterwards, the cast & creators came out for a brief Q&A to talk about thoughts, reactions, character development, and what to expect going forward… In fact, Season 2 is already greenlit! This is particularly exciting news since DC Universe is a brand new service and is starting to build up momentum with these shows.

There are even talks about which other Titans could appear on the show. To me, Hawk & Dove were already surprises in Episode 2, but we know some others that are on their way: Jason Todd’s Robin and Donna Troy (Wonder Girl)!

If you can’t wait, just like me, sign up for DC Universe’s streaming service today so that you can enjoy TITANS when it releases every Friday starting October 12, along with much more content coming soon!