We’re living in unprecedented times as the novel coronavirus COVID-19 affects our day-to-day lives: work, schooling, extracurriculars, and for some, even vacations have been put on hold. This global pandemic is disrupting many societies and some countries have even shut down to try and curtail the spread of this virus. It’s unfortunately devastating and numbers are still climbing even as governments enforce stay-at-home orders. But instead of focusing on what you can’t do while quarantining & self-isolating at home, here’s something you can certainly enjoy indoors with your family!

How would you like to visit Disney theme parks from around the world, including Florida’s Disney World and California’s Disneyland? Since this is the first time ever that Disney has shut down all 6 of their worldwide parks, I thought I’d share some of the best “rides” you can virtually experience from the comfort of your own homes! (All photo credit to Disney.)

– The immersive experience that everyone’s been wanting to try is the new Star Wars: Rise of the Resistance ride! This 18 minute video gives you a full glimpse inside with a first person POV walk-through. I personally haven’t checked out this new Star Wars attraction yet either, so this 4K video really did the trick!

– Another brand new ride is Mickey and Minnie’s Runaway Railway, which utilizes trackless cars and was only open for about a week before Disney had to shut its doors. This video is fantastic and isn’t as shaky as some of the others I’ve seen. It’s definitely a ride I’ll want to check out the next time I visit Disney World!

– You can also hop onto some of the more classic rides too like It’s A Small World, Pirates of the Caribbean, and the 2019 refurbished Peter Pan’s Flight! But with the early release of Frozen 2 on Disney+, might I also recommend the Frozen Ever After ride? 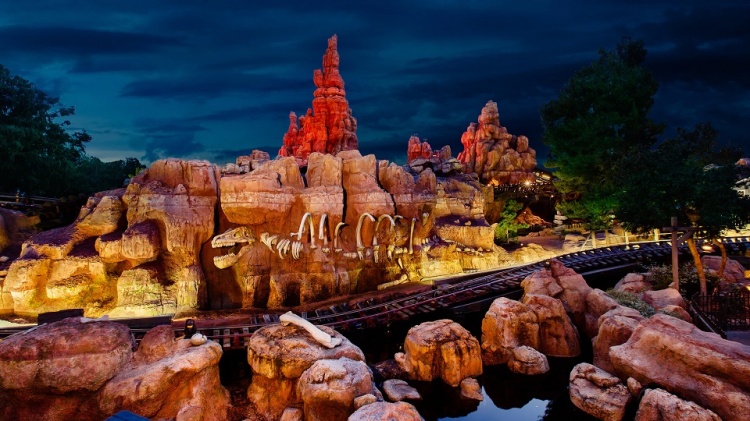 – Some rides are the same or similar to those found at Disney World, but here are some that are not mentioned above: Big Thunder Mountain Railroad (pictured above) is a thrilling roller coaster complete with turns & drops! Check out this beautifully shot video from the back of the train!

– Indiana Jones Adventure is another classic ride that opened in 1995. The video I found has a long introduction but the lighting is really good and not blurry/pitch black like some others I’ve seen. Skip to the 6:55 mark to start the ride.

– And lastly, how about a water ride? Splash Mountain ought to do it! For this one I was able to find a great daytime video AND a nighttime video!

– Then digitally traveling around the rest of the world, here are some other epic Disney rides you can enjoy like TRON Lightcycle Power Run at Shanghai Disneyland where you’ll race from beginning to end on a Lightcycle as the Grid comes alive!

– Or find hidden monsters in Tokyo Disneyland’s interactive Monsters, Inc. Ride & Go Seek! Granted you won’t be able to participate in this video while watching it, but keep your eyes peeled and maybe you’ll find some monsters yourself!

– You can also experience the one-of-a-kind 3D trackless Ratatouille ride, only at Disneyland Paris! Florida’s Epcot in Disney World is planning on opening their version of the ride later this year but until then, enjoy the misadventures of Remy & his friends! Please note that since it is a 3D ride, the graphics may be a little blurry but this is definitely one of the best videos around!