Virtual Pop Expo is an online convention that takes the ever-growing virtual con experience up to a whole new level! It was certainly well-produced and that’s no surprise, considering that VPE is organized by heavy-hitters like Experience Level Entertainment (XLEVELENT) & Kaleidoko and sponsored by Wacom, Neft, Hot Topic, and FYE. But even better, Virtual Pop Expo benefits Feeding America, Treehouse, DirectRelief, and Rise Against Hunger! And with over 60 celebrity guests and over 100 vendors & artists in the virtual show floor via the Auxxit app, VPE is the closest to attending a comic con without stepping foot outside.

Taking place from May 9-10, Virtual Pop Expo held live panels and performances all weekend long via their website, the Auxxit app, YouTube Live, and Twitch, allowing fans to share and even host the live streams on their own platforms! And VPE’s first guest was no stranger to live streams: the legendary voice actor Tara Strong! Tara shared that she loves connecting with fans at conventions and any opportunity to give back to charities. In fact, she recently live-streamed with Kevin Conroy (the voice of Batman) to auction off some of their personal items to help raise money for Meals On Wheels! Tara was also able to talk about her voice acting experience, as well as her on-camera career, and special moments with fans at comic cons in the past… including the times where she surprised some unsuspecting fans while in cosplay!

Another popular panel was with Dan Fogler’s podcast: “Dan Fogler’s 4DXperience”, which was a precursor to Sunday’s pre-tape of his Heavy Metal panel. This segment was filled with hilarity and tons of Fanboys references, which I loved, but more importantly it acted as a mini Walking Dead reunion with Ross Marquand & Cooper Andrews hopping on the call, and thus representing different franchises like Harry Potter, Marvel, and DC Comics.

But it was great to hear from each guest as Fogler cranked out the jokes and pop culture trivia, talking about voice acting, childhood cartoons, and even playing “The Impressions Game” featuring Fogler impersonating Christopher Walken changing a diaper and Cooper Andrews’ James Earl Jones practicing social distancing! And just like at an in-person comic con, all celebrity interviews at VPE featured a few pre-selected fans who were able to actually hop online to ask their questions just as they would standing on a line during a panel. In fact, hundreds of people from around the world gathered in the queue before the con even started, and also during the preview night, where FYE was hosting charity auctions & giveaways for exclusive collectibles at their virtual booth in the Auxxit app: 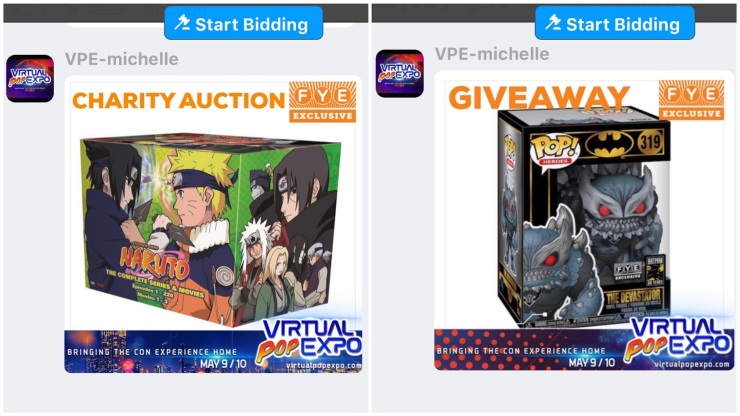 Also in the Auxxit app, vendors & artists could be found in their individual “booths”, engaging with fans directly and selling merchandise. While other online cons simply direct you to Etsy or other e-stores, Auxxit allowed exhibitors to make direct sales and actually chat with you in real time, offering specials or accepting offers for the duration of the con.

All booths were essentially active the whole weekend, both during the show and even after hours. And speaking of after hours, Virtual Pop Expo continued to offer content even when panels were done for the day with events like an interview with the Jedi Fallen Order development team, an Auxxit happy hour, a WWE panel, and even live D&D!

Meanwhile on Saturday, kicking off the Star Wars Block (presented by Hot Topic), Greg Grunberg talked about the projects he has lined up, as well as the current social climate and how “quarantainment” is taking over with Zoom and other streaming services. And later, fellow Star Wars star Ashley Eckstein got to take a trip down memory lane and recall the journey of the hit show Clone Wars which recently premiered its series finale on Disney Plus. 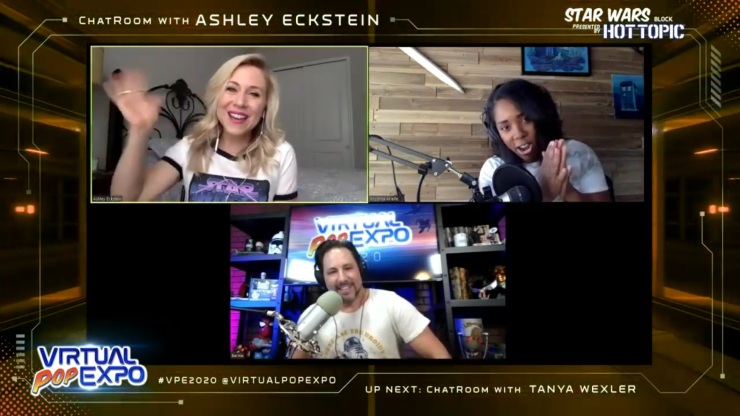 Ashley touchingly shared about the impact of the show but more importantly the impact of the fans who helped breathe life back into the series when it originally finished its run in 2014. She also got to talk about her clothing brand Her Universe which has really propelled forward apparel specifically for female fans – and now the line proudly provides fashion & accessories for everyone!

Particularly during Ashley’s panel, the chats were blowing up with tremendous amounts of support and love, thanking her for creating Her Universe, helping those in need, and being an advocate for mental health.

And though Virtual Pop Expo had so, so many more panels, we can’t leave out mentioning something very special… the Virtual Cosplay Contest! 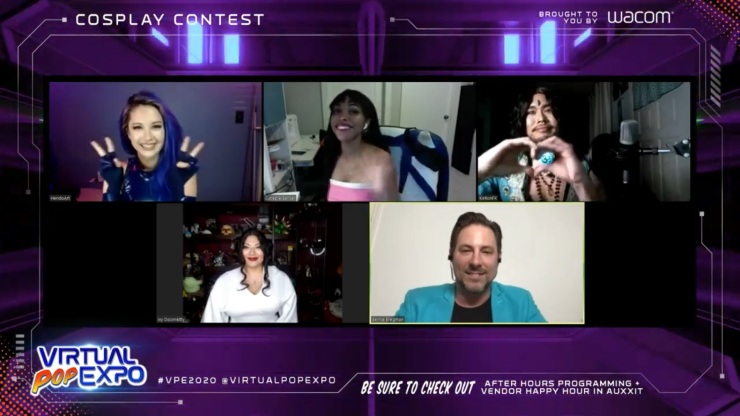 Contestants submitted pre-recorded footage and images of their homemade cosplay to maximize image quality on the stream, and the cosplay was all fantastic! It truly was as brilliant as any top notch comic con cosplay contest. And with guest judges Ivy Doomkitty, Hendo Art, Cutiepie Sensei, and Kelton FX, one lucky grand prize winner was going home with an amazing Wacom One tablet! Check out some of the cosplay below:

For more information on Virtual Pop Expo including potential future online gatherings and replays of this show, visit their official website.