Is it fun to be scared, or are you scared to have fun? You decide with Fright Fest at your local Six Flags!

The closest one to me is Six Flags Great Adventure & Safari which, if you didn’t already know, is the second largest theme park in America after Disney’s Animal Kingdom (Orlando, FL).

If you read only one thing about this event, it’s that you need to arrive early! We arrived at 2pm and it was already tough to get in with the parking and lines. They even warned us from the get-go: 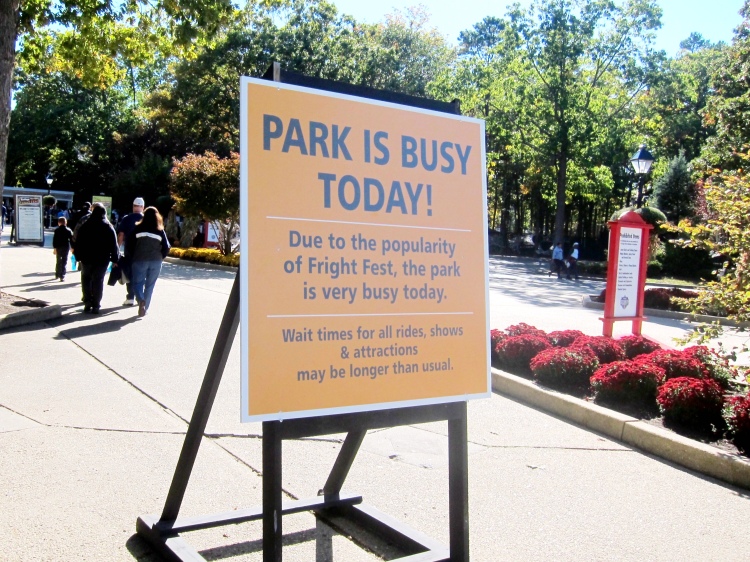 On our particular day, Fright Fest closed at midnight but when we left around 8-9pm, the lines for security and parking were so much more insane! Be sure to check your park’s hours.

Six Flags advertises the event as “Thrills by day! Fright by night!” which means that in the daytime it really isn’t supposed to be scary. It’s family friendly and since it’s light out, the only dressed up monsters you’ll see are in designated featured shows/events. So you can enjoy the Halloween themed decorations and attractions without the scares. But as dusk approaches, the demonic announcer repeatedly warns the entire park that 6pm is only X hours away, which is when Fright Fest really comes alive (or undead). But during either time we didn’t see Bugs Bunny or his friends. It’s all Halloween at Fright Fest!

In case you are worried about what the monsters can/can’t do, here are the official rules:

But until they are unleashed, enjoy the park! See the sights, try the rides, eat the food, play the games. One of our favorite decorations was the transformation of the water fountain into the “Blood Fountain”. An extra barricade was set around it so that kids couldn’t tamper with the props or red water (or the “blood”):

Another way to enjoy the park is Skyway Frontier Adventures! An 8 minute, 104 feet high soaring adventure to see the whole park from up above. 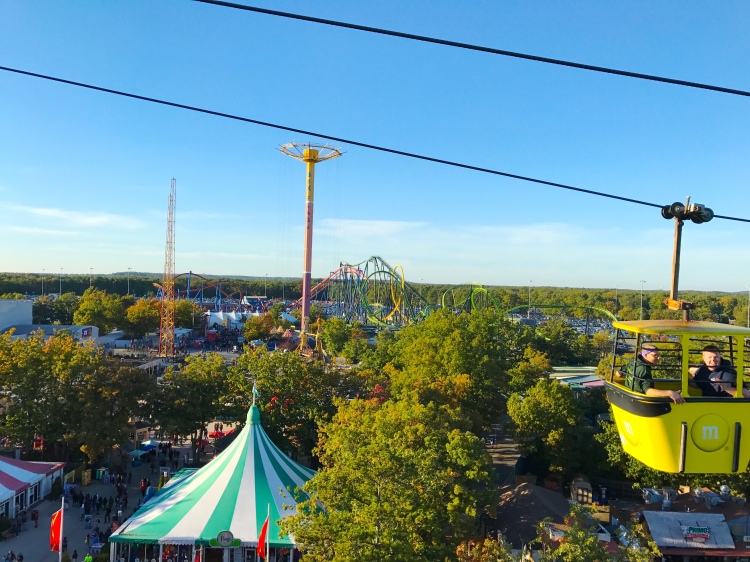 But night quickly followed and as it passed 6pm, the ghouls & goblins were set loose on the park. You’ll see zombies walking around a la The Walking Dead or creeping around a la Enchantress (Suicide Squad). Some will chase after you, revving prop chainsaws, while others just hide around the corner or behind columns to pop out at you.

Some try hard to scare you. Some hardly try…

Depending on the section of the park, you’ll encounter a different kind of monster. Mostly zombies but you may run into clowns or demons too (red, horned, fanged, you name it)! Some walk calmly among you to see when you’ll notice while others jump off prop police cars to scare you. On top of that, you’ll notice steel drum barrels suddenly appear. The monsters will abruptly shake them, drag them, or hit them to make you jump. You’ve been warned.

If you want some extra scares, be sure to check out the haunted houses & mazes like the new Cell Block 6. The line was incredibly long so be sure to get there early!

As the evening was winding down, we finished with Dead Man’s Party: Graveyard Rock. This program was a souped up nighttime version of The Skeletones from earlier in the day, but this concert had singing, dancing, lasers, and pyrotechnics.

But I think my favorite part of the night was the fog & lasers in the Demon District. Everything was really well done in this section, and it’s where the prop police car was stationed. Fog was coming from everywhere and, in combination with the lasers & lights, looked eerie and really cool!

As we exited the park, the staff was handing out treats and our wave received some bags of Churritos Fuego. Delish! Fright Fest was frightfully fun and can’t wait to go again next year!