You may have heard about it from your friends, you may have seen it trending on Facebook, but you won’t know until you finally go… New York Comic Con is the biggest comic book / pop culture convention on the East Coast, and possibly the country (hard to say with San Diego Comic Con these days)!

This marks my 5th time attending this con and, I kid you not, it gets bigger and better every year! Not only do you get world renowned brands/companies as vendors, but you get to meet key & influential people: writers & artists and actors & directors. Not to mention all the exciting merchandise and displays set up!

The biggest concern by the fans this year was the Fan Verification process to obtain the badges, and the activation of the RFID (which normally wouldn’t be a problem but now you have the “pressure” of Fan Verification). We had no worries though since we got our badges legit through ReedPOP and their treacherous online queue… This called for celebration with their exclusive Brooklyn Defender 2016.

But long story short, we got in. It was a big deal for us this year because it was Stan Lee‘s final appearance, and in general his second to last con on this side of the country! So clearly we had to meet Stan The Man himself. This ended up taking a lot of time out of our morning but we got our comics signed! Star Wars issue #1, The Spectacular Spider-Man #200, X-Men Flashback #1, Fantastic Four #277, and Spider-Man #13. 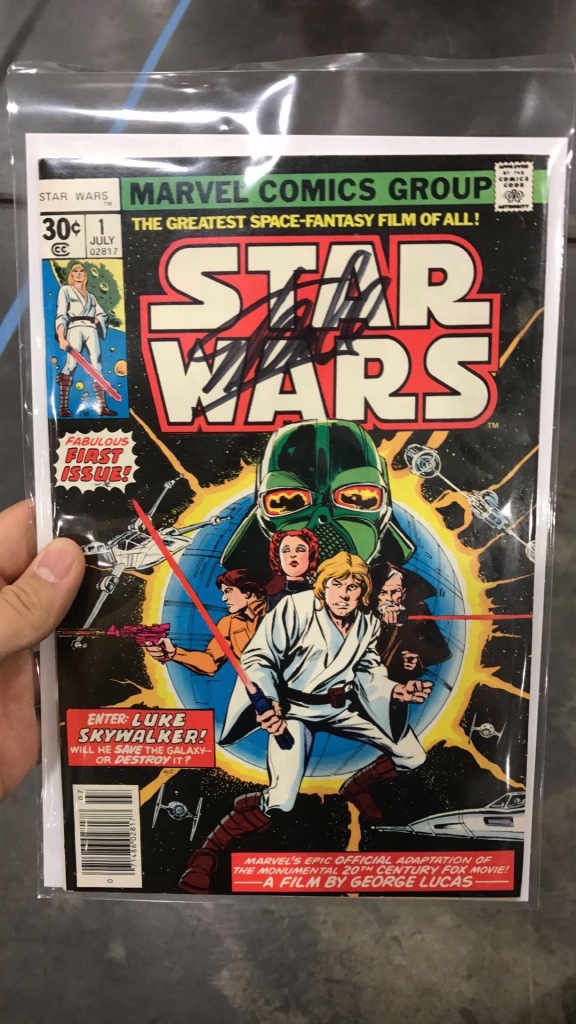 Waiting for the photo op was the other half of our day.

But in between, we got to see all sorts of amazing cosplay, vendor booths, and even receive freebies throughout the con.

And to celebrate the 75th anniversary of Wonder Woman, DC Comics had a beautiful display of art and props from the upcoming Gal Gadot film as well as the costumes worn, displayed outside in the main area.

But some of my favorite moments at NYCC were meeting some iconic celebrities:

Carrie Fisher – It was a close one because we almost didn’t get Carrie on Saturday due to some re-shoots for Episode VIII. I asked her how they went and she said, “Really well, thanks!” So that’s something to look forward to. We walked into our photo op disappointed after seeing that her entire day’s autograph sessions were capped, but cheered up when we heard her say, “I love your shirts!” We were also pleased to see Gary right beside her. The Force must be strong with us because somehow we got into her last autograph session after all, and being last in line she added an extra xoxo to my signed headshot! 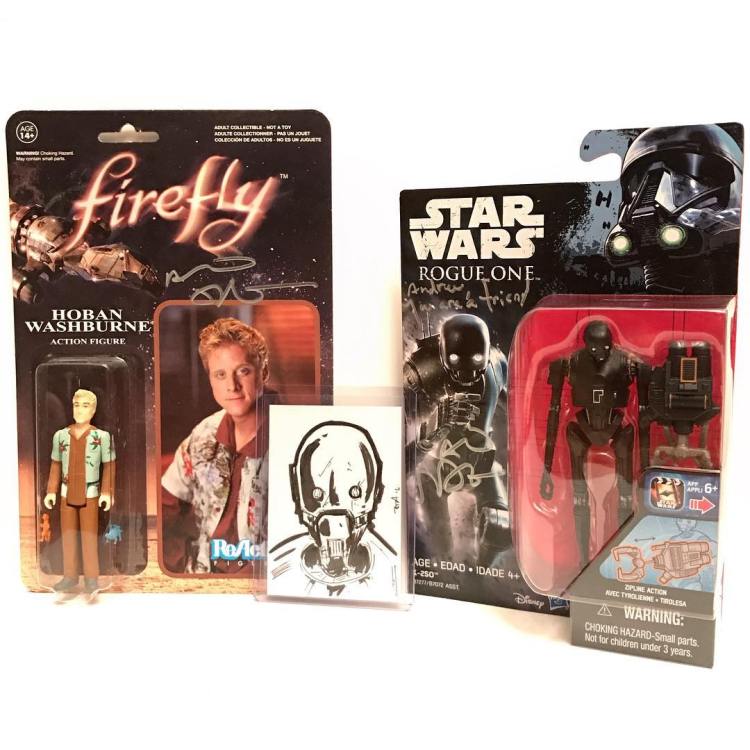 Alan Tudyk – What a genuinely nice guy. I immediately greeted him with, “The con man himself, hello!” He let out a laugh and we hit it off. He stopped what he was doing to listen to how I recently got into Firefly. I explained that my first exposure to his work was Steve The Pirate and Sonny. He was very sincere in asking me what I thought about Firefly, as if it were on its first season (…get it?) and then he signed my K-2SO figure with a personalized quote from Rogue One, saying he didn’t really get a lot of K-2SO figures at NYCC. Thanks, Force Friday! 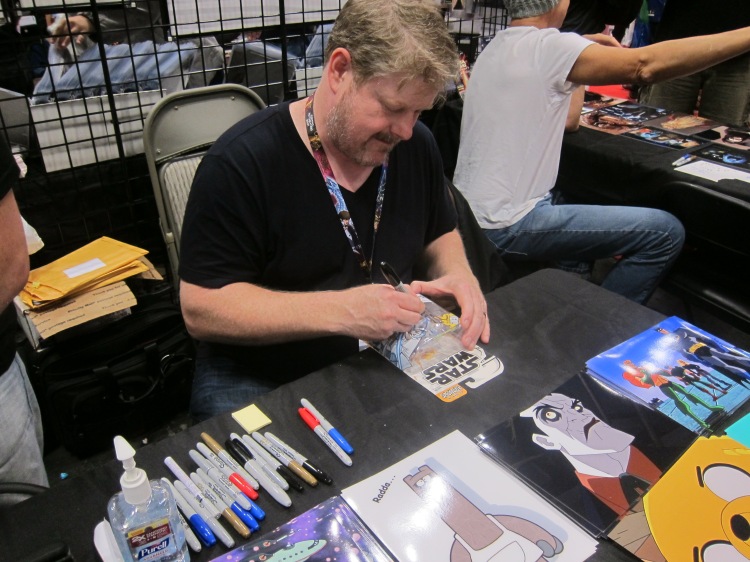 John DiMaggio – A voiceover legend. He’s known for Jake (Adventure Time) and Bender (Futurama) but I knew that he did some General Grievous in Tartakovsky’s Clone Wars. When we got up to the front, he saw my figure and looked shocked. I asked if it was because it’s an unconventional choice for his work but really he said it’s because he got booted by someone in-house that said they could do his job. Sounds like Matthew Wood in the end, who did Grievous in Episode III and in the newer Clone Wars series. Either way, it was great to meet him and he left a nice sarcastic (or not) “Thanks!” by his signature. Salt in the wound?

Jerome St. John Blake – The jokes and sense of humor with this guy knew no bounds, kind of like his height! A man with many roles, we talked about how his on-screen appearances in Episode I totaled about 42 minutes vs. Ray Park’s Darth Maul at roughly 7 minutes. I told him I met Ray at Wizard World, to which he replied that Wizard World has become so widespread that there are probably 8 mini versions happening right now around us (joke). But it was cool to learn that he was in the city to sign some cards for Topps too. I wish him well with his side project band, Buttcheek Selfies (pokes fun at Dropkick Murphys). 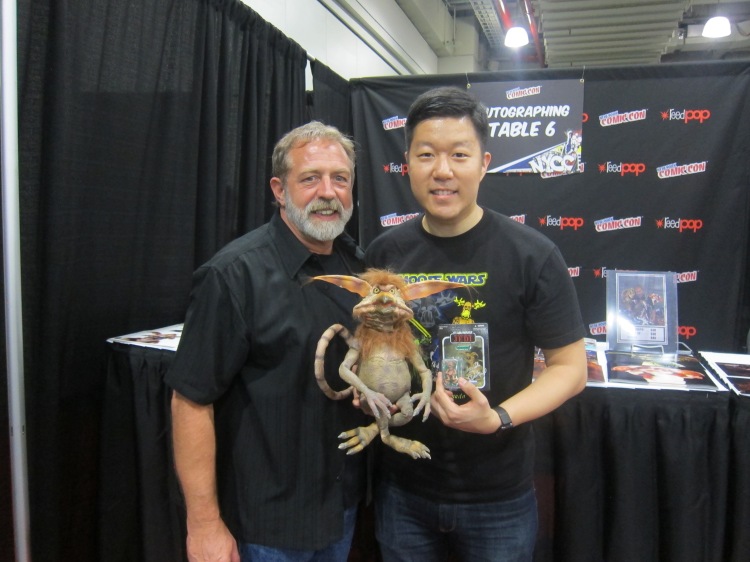 Mark Dodson – He got the last laugh. Salacious B. Crumb. I learned a lot about Jabba’s pet from Mark. Like how the origin of “Salacious” came from some Lucasfilm guys in London having a drink and one needing to tie his shoelaces… “Salacious?” “No, shoe laces!” “No! Salacious Crumb!” And the B standing for Bread, since all Jabba fed him was breadcrumbs! I think the best surprise was learning that Mark was also in Episode VII. This guy is a legend!

But enough talk, here’s my vlog from NYCC 2016. If a picture‘s worth a thousand words, take a look at this: