Fanfaire NYC is an annual 2-day festival brought to you by Manhattan’s very own High School of Art & Design. Over 100 artists & vendors appeared at the School from February 16-17, 2019. Alumni guests included Neal Adams (Class of ’59), Art Spiegelman (Class of ’65), Larry Hama (Class of ’67), and Michael Maddi… as well as special guests Adam Kubert, Vita Ayala, Amy Chu, and so many others! It was a gathering of fans, industry experts, and aspiring professionals – with fields including comic books, animation, technology, architecture, and even fashion.

For their second year of Fanfaire NYC, students of the High School of Art & Design were encouraged to attend and were even offered a low discounted admission of $5! Plus, with opportunities to receive advice from some of the best in their industries and share their portfolios, Fanfaire proved to be not just a comic con but a special venue for learning and discussing with others.

In fact, I too learned something by attending the “Make Better Comics” with Larry Hama and Adam Kubert: 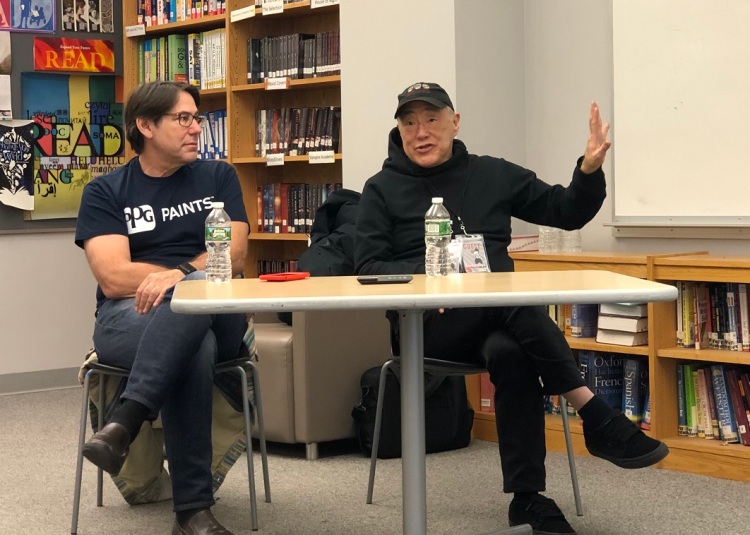 In this hour long panel, Larry Hama & Adam Kubert discussed the various techniques that could make a comic “good” and what could make it “better”. Topics such as Contrast, Page Flow, References, and Page Endings were all covered as multiple slides displayed side-by-side examples of comic book panels. It was a huge eye-opener to hear the thought process and creative methods used by these two living legends! And both Hama & Kubert were nice enough to spend some time talking to fans & students at their respective booths and even sign autographs (see more in the photo/video at the end of this post).

As one of Fanfaire’s sponsors, New Jersey’s own The Kubert School displayed some of their alumni’s works as well as offering a portfolio review for cartooning, animation, illustration, animation, and graffiti. There were even original art and commission requests being done at the booth. And if that’s your thing, then step right on up because with over 100 booths, you’re bound to find an artist or vendor with something that matches your interest or favorite fandom!

I was very excited to discover artist Angel Santiago and his booth of sketch covers, prints, and original comic books: 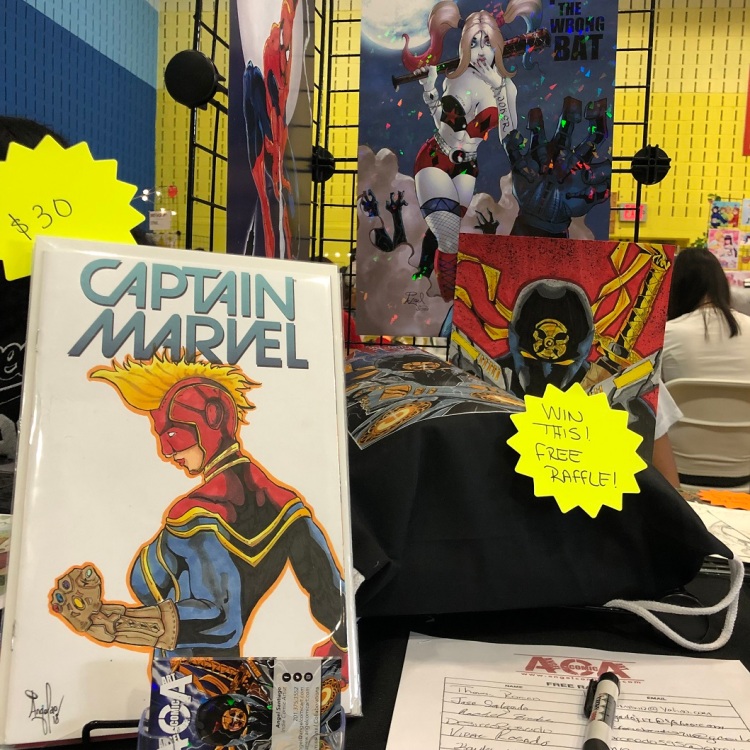 A cool & unique piece he was selling was a prismatic print of Batman & Catwoman. (Check it out in my video at the end of this post!) He was also running a free newsletter raffle for some of his art, which was a common element across the show floor.

I also ran into Fat Guy Inc. where artist Peat Vazquez had prints, paintings, and even a mystery bag option! Check out some of Peat’s art: 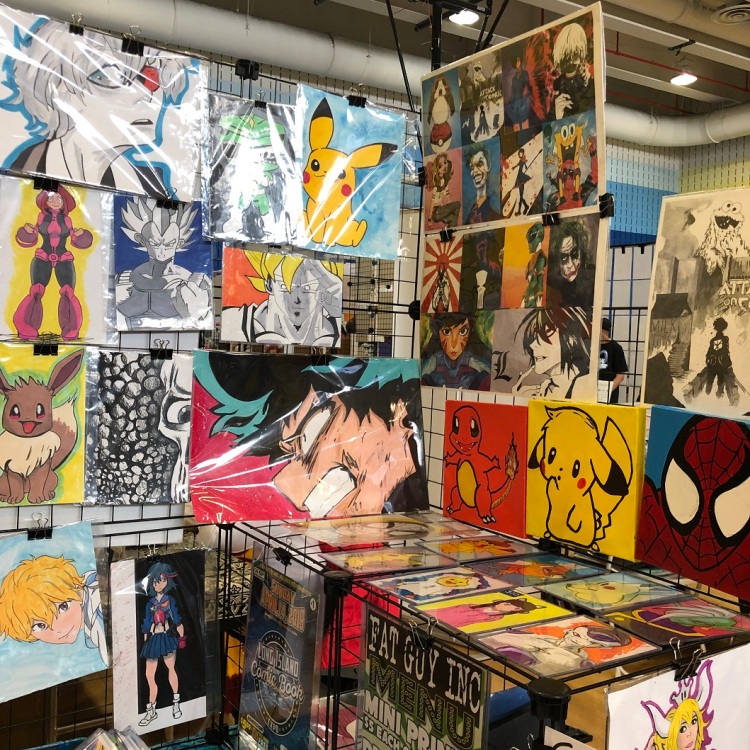 We’re talking about multiple aisles of art across the school’s gym and cafeteria. So on top of attending the panels, it took me some time to thoroughly go through the show floor: 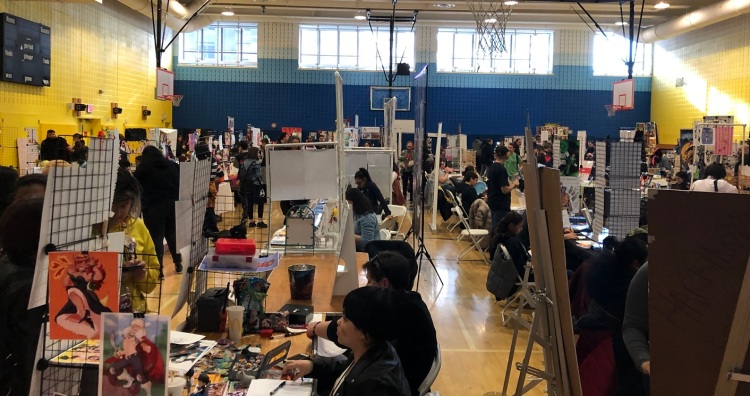 Luckily, the show was 2 full days! And some other fantastic artists I met included Michael Gerlich, James Rodriguez, and Brian Kong:

I enjoyed Brian Kong‘s booth because not only did he have fantastic prints, he also had binders full of his trading card work done through Topps.

Specifically, he had the original pencil sketch and acrylics done for base card #26 from the Star Wars Galaxy 2019 set and was even offering this particular card signed at his booth: 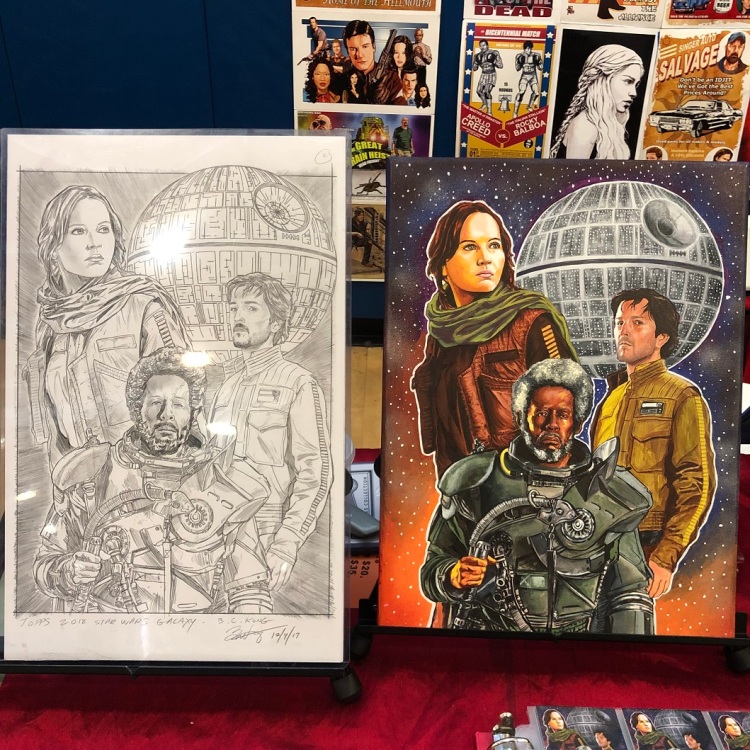 As a Star Wars & trading card fan, you know I picked one up!

So yes, there really was art everywhere you look! In fact, in the school lobby, artist Will Torres was even set up with his self-published books and sketch covers:

But as I mentioned, Fanfaire offers even more than just art! I saw some amazing crafts, games, and even apparel sprinkled all around the various booths.

Retro Kingdom is another unique vendor. Based in NYC, Retro Kingdom deals in rare, imported, and unique video games. Their table had a vast assortment of foreign video games you may or may not have heard of!

And speaking of foreign content, Kodansha Comics had a great panel covering Japanese manga in America including (but not limited to): Alita, Attack on Titan, Fairy Tail, Ghost in the Shell, Sailor Moon, and more!

As the publisher of many major manga series, Kodansha brought special content to share with fans about Alita and their other properties, and even gave out some prizes! During their Q&A time, I asked if the potential success of the 2019 film Alita: Battle Angel could bring a new comic or manga adaptation based on the movie (by the way, if you haven’t seen the movie yet, what are you waiting for??). And in doing so, I won an Attack on Titan shirt!

But there were tons of other great panels throughout the weekend including animation advice, special effects, a cosplay competition, and a panel with Neal Adams on inking. Who wouldn’t want to learn from one of the best?

Neal, per usual, had his iconic comic con booth set up in the school cafeteria featuring countless prints, variant cover comic books, sketch covers, and even original artwork! He even had his special variant covers for the upcoming Detective Comics #1000 up for pre-order…

At his booth you could also buy an autograph from him for $50 or take a photo with him for $30. It was great to see him interacting with not only fans, but students, faculty, and prospective artists.

But that’s what Fanfaire NYC is all about! As a public school, the High School of Art & Design aims to use Fanfaire as a way to help fund the students and the school. With many students coming from underserved communities, it becomes difficult to not only pay their way through schooling but also to acquire the necessary tools & supplies.

To help this school and its mission is truly a one of a kind chance via an art & pop culture event. If you’ve never been to Fanfaire NYC before, I highly recommend it next year! It’s a great time filled with awesome content and an even greater community.

For more information on Fanfaire NYC, please visit their website.