It’s that time of year again for the biggest pop culture event on the East Coast! This marks my 6th year attending New York Comic Con, home to the latest in comics, video games, movies, toys, anime, and much more!

If you’ve only attended small cons before, New York Comic Con is exactly the same… except pumped up on Bane’s Venom formula! Just imagine your favorite local comic con amplified 10 times! So without further delay, here are some of my favorite moments:

Despite the space restrictions this year due to the $1.5 billion Javits Center expansion, I think ReedPOP did a good job managing their 12th NYCC. And as always, they had a great display for DC Comics in the South Concourse. A giant Justice League banner & costumes were out, DC television show clips were playing, and some cool freebies were given out.

On top of that, Graphitti Designs had some incredible t-shirts and variant covers of this year’s Dark Nights Metal issues as well as their tie-in’s (Red Death, Murder Machine, and Dawnbreaker). I waited on their line which was almost an hour long and many covers sold out for each day’s allotted quantities! Thankfully I got the ones I wanted.

Along with DC were some amazing booths for photo ops, VR/AR, and fan experiences. You could hang like Spidey in an upside-down room, step inside SpongeBob’s Pineapple, or snap a photo with some Justice League cardboard cutouts.

But I had a blast inside on the show floor. 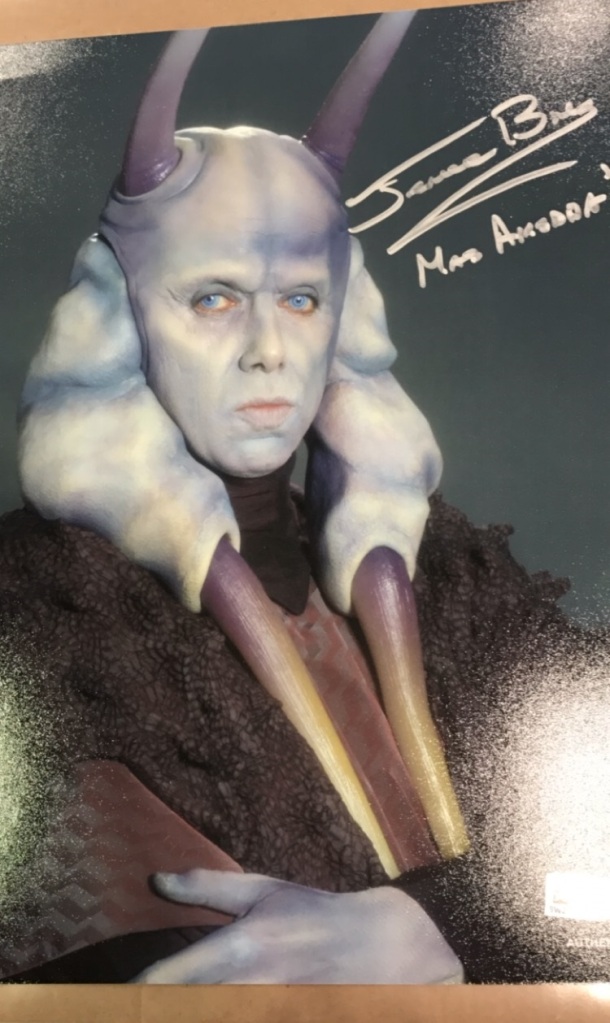 One of my favorite exhibitors is trading card company Topps. They were offering giveaways and Star Wars autographing all weekend.

On Thursday, I got to meet Jerome Blake (who I had the privilege of meeting last year as well) and even got to hang with him a little afterwards. Such a nice guy and his presence in Episode I is quite important! He signed an 8×10 and my Oppo Rancisis figure.

On Saturday, I met Philip Anthony-Rodriguez (the voice of the Fifth Brother in Star Wars Rebels) who signed an 8×10, my Fifth Brother figure, and my Topps card.

Just as they did at Star Wars Celebration 2017, Topps authenticated the autographs with their special holographic QR code which verifies that specific signature. And on top of the free autographs, Topps was also offering some great giveaways by participating in a scavenger hunt & app demo!

To get the exclusive chase droid cards, you had to receive 3 stamps found on the map card. They were also giving out an exclusive trading card each day from The Walking Dead, Star Wars, Garbage Pail Kids, and Mysticons. Lastly, you could win exclusives like a Star Wars poster, card holder, or Rey pin by earning a high score on their game Topps BUNT’s Batter Up.

In addition to Topps, Konami had a section set up for Yu-Gi-Oh. They were handing out Yugi hair headbands and had a booth to turn yourself into a custom token card!

Like many others, we went for the New York Comic Con exclusive design! This was a great freebie and the line wasn’t that long either.

Some other great photo ops were Bandai’s Power Rangers morphin’ grid and a Dragon Ball power-up video (more in my YouTube video). I even met Sean Schemmel (voice of Goku) while waiting to power up! 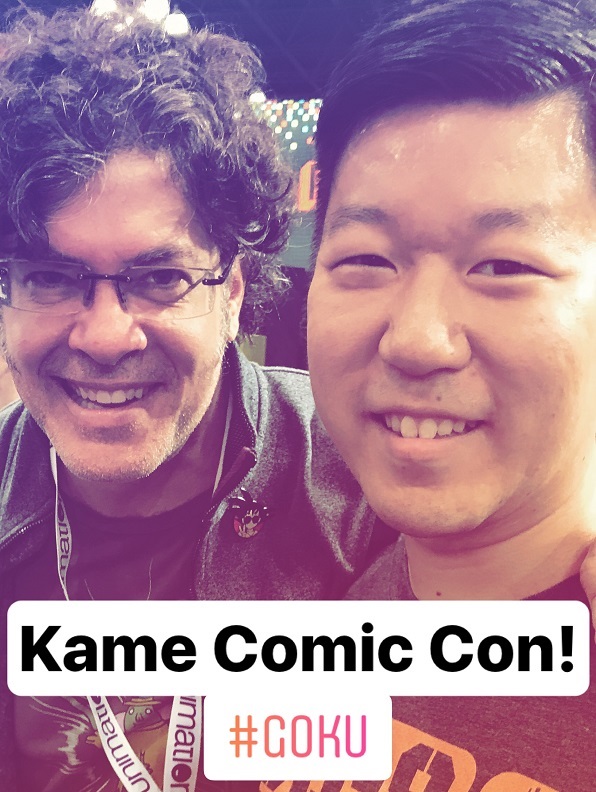 Unfortunately, I didn’t get to meet David Yost (the original Blue Ranger) this time around. He & Amy Jo Johnson are the last of the original MMPR cast I’ve yet to meet. But I did get to meet some other amazing stars. 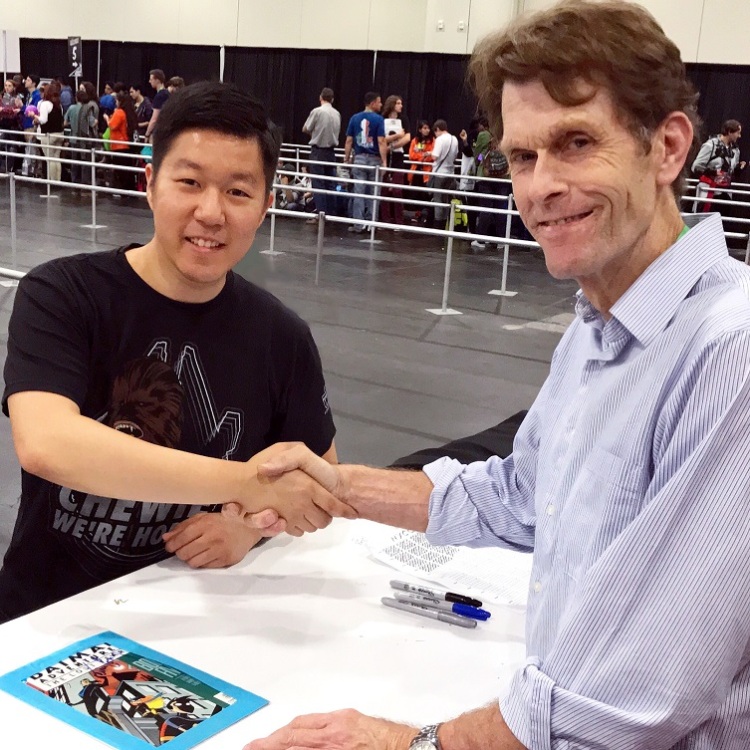 Kevin Conroy – He’s not just the hero of Gotham. He’s the hero of my childhood. “I am vengeance, I am the night, I am Batman!” A long line to meet him, but well worth it! I told him how much Batman The Animated Series impacted me growing up. I brought one of my favorite childhood Batman Adventures comic book to get signed too. I explained that Loren Lester (Robin/Nightwing) signed off to the side to leave room for Kevin’s autograph. Mr. Conroy laughed and signed up top to leave room for Tara Strong (Batgirl).

Tara Strong – This was Tara’s first NYCC! One of the most popular voice actors of our time: Timmy Turner, Bubbles, Raven, Harley Quinn, Batgirl, the list goes on and on! And while she arrived late to her last autographing session, Tara stayed extra to meet every single fan instead of cutting the line short. I told her the story of Loren & Kevin and how there’s tons of room for her name now… and she signed a very tiny autograph on Batgirl’s cape. What a story! This comic book is now being graded by CGC with their Signature Series program. 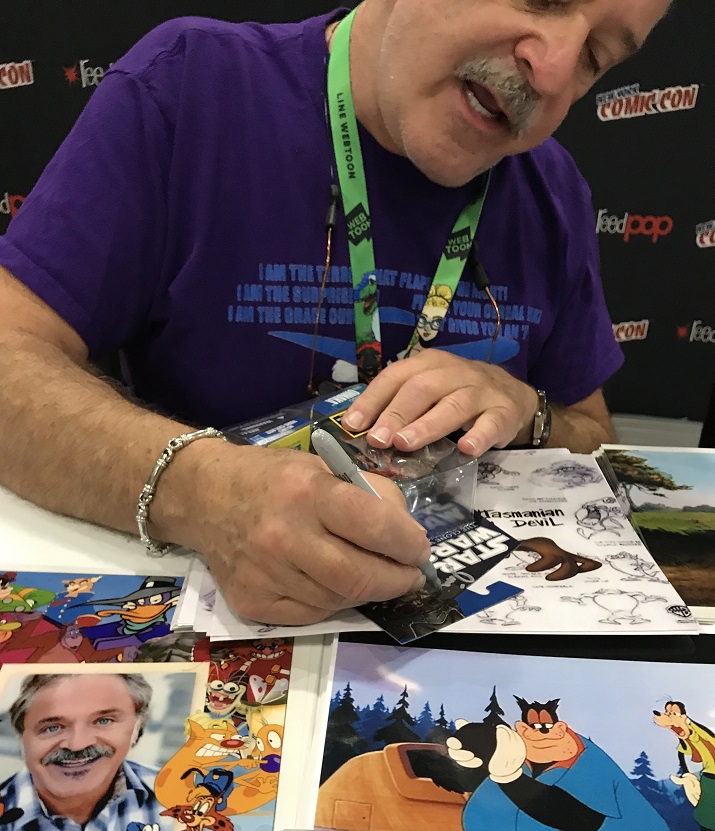 Jim Cummings – Kind of a Disney legend. You may know him as the voice of Winnie the Pooh, Tigger, Pete (Goofy), Razoul (Aladdin), Bonkers, Darkwing Duck, Dr. Robotnik… You can check out his IMDb for more! But I just had to finally get his autograph on my Hondo Ohnaka figure from Star Wars The Clone Wars. Initially, we were worried on the line because a lot of time passed and he hadn’t shown up for his autographing session. But when he finally arrived, we all had a fun time. As I was leaving, he even did the voice for me: “Do me a favor… [voice] Be careful out there. There are Jedi EVERYwhere!”

Nolan North – Another voice actor legend. His credits are too long to list (IMDb) and his line never got shorter! He was a very nice guy and took the time to chat with fans. He told me a great story about how he was directed by George Lucas for the episode of The Clone Wars he voiced as El-Les. I told him that that episode was so good and kicked off one of my favorite story lines in the whole series.

Along with the autographing area downstairs was the new Artist Alley. Because of the construction being done at the Javits, Artist Alley was moved to the “experimental” hall from last year. Frankly, it was too warm down there and I can’t imagine spending all day in the cramped aisles. I had to navigate through here a couple times to reach the lower level CGC (because the upper level CGC would not travel to the autographing area). But at least I got a free print from artist Christopher Jones!

Meanwhile, upstairs on the show floor you could find some great artists & writers for meet & greets and book signings.

Early in the morning I received the wristband which entitled me to purchase the convention exclusive of From A Certain Point Of View – Penguin Random House’s compilation of 40 Star Wars stories from 40 different authors! Over the course of the NYCC weekend, I was able to get my exclusive book signed by 4 of the authors who worked on it (which is 10%… not bad, I guess?): Chuck Wendig, Delilah S. Dawson, Pablo Hidalgo, and Jason Fry. They each signed standalone posters for their respective books as well.

IDW also had a signing with Star Wars Adventures creatives Derek Charm (artist) and Landry Q. Walker (writer). They signed my SDCC Star Wars Adventure #0 ashcan issue and it’s on its way to CGC too! Surprisingly, they mentioned that they didn’t get any of these to sign this weekend:

What’s beautiful about New York Comic Con is that it appeals to all kinds of fandoms whether it’s comic books, movies, or pop culture in general. And the Fandom Fantasy Food Truck is no letdown in this category. Featuring food & drink from Star Wars, Stranger Things, Rick & Morty, and The Walking Dead, this food truck serves up sweet & salty treats to give you a little boost during the con. 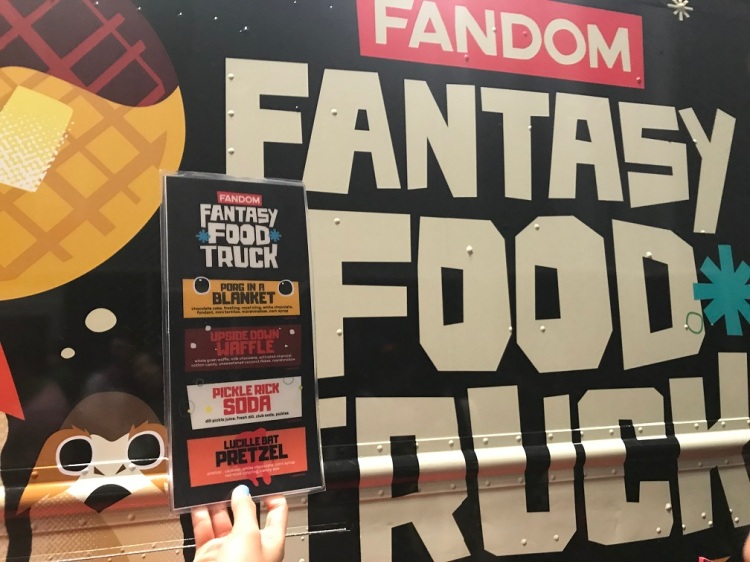 Quantities were limited and were on a first come, first serve basis. But throughout the weekend we were able to try out all 4 items: Porg In A Blanket (chocolate cake pop with royal icing, white chocolate, and marshmallow wrapped in a mini tortilla), Upside Down Waffle (whole grain waffle covered in milk chocolate, cotton candy, unsweetened coconut flakes, and marshmallow), Pickle Rick Soda (dill pickle juice, fresh dill, club soda, and pickles), and Lucille Bat Pretzel (a pretzel stick covered in caramel, white chocolate, red food coloring, and a candy eye)!

Also, throughout the con, food vendors were serving up Brooklyn Defender 2017! We didn’t get to pick up a pint but we got to check out the launch party last month. Check it out here.

But one of the best parts of the con was the surprise booth by Verizon to showcase Star Wars: The Last Jedi (and how about that trailer??)! This immersive experience deserved its own post so be sure to check it out here.

Some other highlights from the con were the world premiere of 8K at Domo! World, the DIRECTV NOW Walking Dead photo booth, Weta Digital’s Planet of the Apes mocap station, and the Lego BrickHeadz truck for the Boba Fett/Han Solo Carbonite exclusive!

We wrapped up our time at New York Comic Con with An Evening with Mark Hamill at the Hammerstein Ballroom. Because we got to meet Mark at Celebration for photos & autographs, we decided to skip the meet & greet at NYCC and opted for the paid panel. Recently ReedPOP started offering a variety of off-site panels that don’t require NYCC badges but do require payment. This is an excellent alternative for non-attendees, but additional hurt for already paying con attendees. (Not to mention the extensive bag check removing all Sharpies, gum, etc. which we sort of got back after the show…)

For $1500, you’ll be in the first row with a post-show meet & greet with Hamill himself – plus an included autograph & photo session. Needless to say, we got the best seats on the first balcony and enjoyed 2 solid hours of #Hamillstein – stories of his journey as Luke, his voice acting career, an extensive Q&A, and a heartfelt tribute to Carrie Fisher. 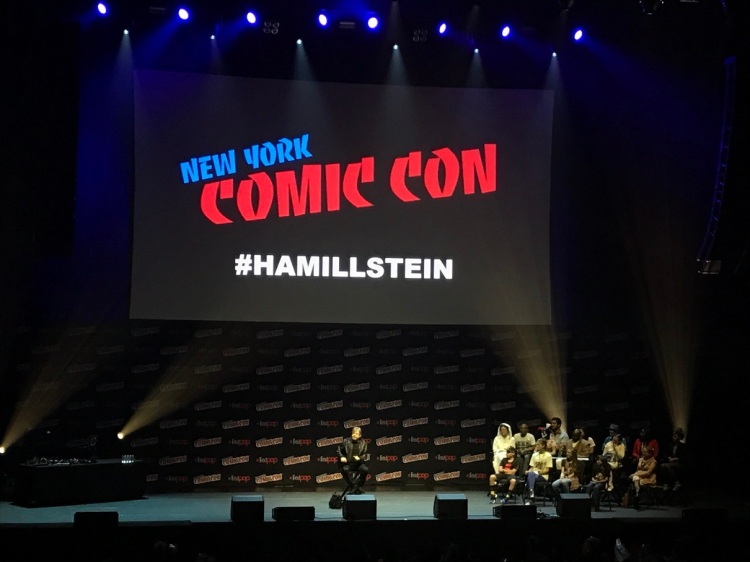 15 random audience members received a blue Post-it indicating that they would be moved to stage seats, which they called Hamill-vision! This also guaranteed them a free autographed headshot presented later in the show. And during the Q&A, the first 15 people also received autographs.

It was truly a memorable talk even if you’ve heard some of the stories before. Mark has a way with words and you can tell the man really cares about the fans too!

To wrap up, New York Comic Con 2017 was so much fun! Honestly I was worried about the crowds and space issues due to the construction but not only was this not an issue, ReedPOP did an unbelievable job managing the morning queue lines too! We got to do almost everything we planned, and even had time to visit the WB/Boomerang/BoxLunch “Get Animated!” pop-up on top of that. I’ll be curious to see how next year is handled as the Javits goes through even more changes.

Until then, see you at the next con!