ToyConNJ is a family friendly event jam-packed with thousands of toys and collectibles. Back at the Parsippany P.A.L. building this year, multiple gyms are once again filled with over 200 vendor tables and displays for endless fun throughout Saturday & Sunday, April 21-22, 2018! Let’s take a look inside the con and be sure to check out my video recap at the end of this post:

This was my first time attending ToyConNJ and I had an absolute blast!

As soon as you enter one of the rooms, all you see are aisles and aisles of toys!

I was blown away by the variety offered throughout the weekend, and it was basically a walk down memory lane for me! We’re talking about toys, cards, comics, models, playsets, video games, consoles, LEGOs, and so much more.

Within the first 30 minutes alone I saw a bunch of collectors leaving with bags full of purchases… only to come back after unloading all of them into their cars!

From what I could gather, if you were a child during the 70s, 80s, or 90s, you’ll probably find a ton of things you used to own or wish you did. That means you can easily spend a few hours here looking for all of those sought after items from your childhood. And not only were the vendors selling loose toys, but toys that are still boxed and/or carded too: 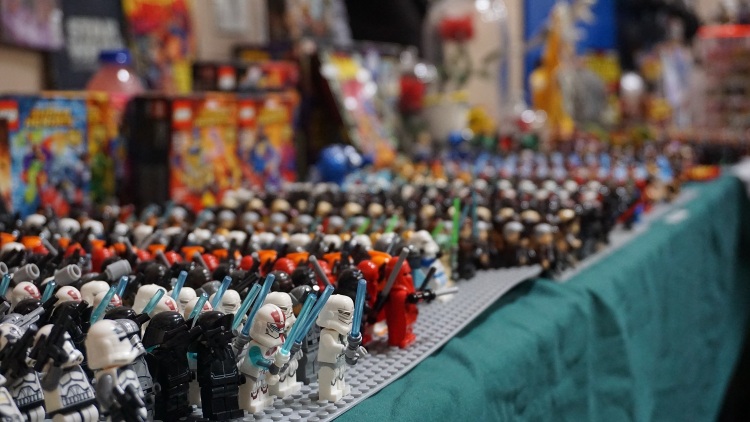 The organizer, Veteri Productions, did an amazing job providing vendors with enough space but also allowing enough room for attendees to move and breathe comfortably. Even at its busiest, it still wasn’t that bad – it was pretty refreshing not having to constantly squeeze between people or worrying that my bag of goodies will get crushed from the crowds. If that aspect is as important to you as it is to me, then you’ll appreciate this con.

Some vendors were only present on Saturday and were swapped out with new vendors on Sunday. So when you’re debating over whether or not to buy an item, decide quickly because it may not make it to the next day! 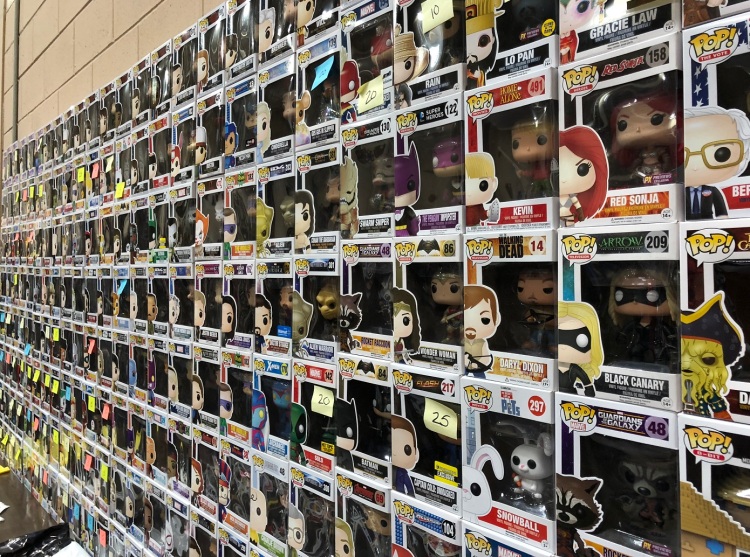 Literally no wall nor corner was wasted. Many booths took advantage of their shelving and stacked up their products as high as they could. So be sure to look up & down as often as you do left & right! That’s how I was able to pinpoint and score a vintage Star Wars figure: 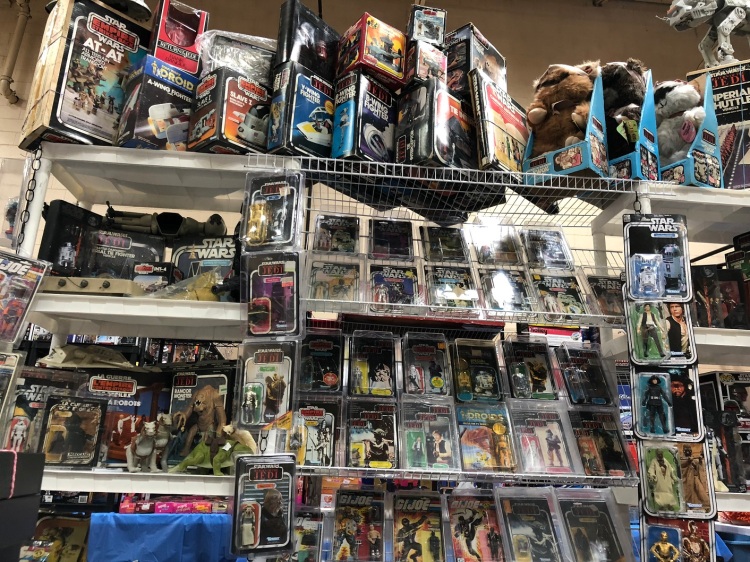 Some noteworthy vendors included MuckyChris who 3D prints some amazing custom collectibles and Ole Jade Jaw Customs who makes custom prop replicas & 6″ scale figures (such as the 6″ carbonite blocks below).

One important difference I experienced between ToyConNJ and a “typical” comic con event is that the vendors weren’t strictly shops or online businesses. In fact, you’ll find that many are just like you: average local collectors who are just looking to trade or help out fellow collectors find what they’re looking for… It could be a Star Wars The Vintage Collection figure from 2010 or an Avengers figure that came out last week.

In fact, I personally overheard one transaction go down where a customer was looking to do an even swap with a couple 1/4 scale NECA figures!

But what was a nice surprise was the third gym which housed many Matchbox vendors, R/C cars, racetracks, and even a mini arcade!

I saw a lot of kids playing with cars, testing out the R/C’s, and even trying their hand at classic arcade cabinets like Frogger & Tron, and consoles like Atari & ColecoVision!

Microsoft was even in this section with some portable Xbox setups and an AR (Augmented Reality) experience.

After we finished with this room, we walked out and discovered caricaturist Daniel Perez who was offering free sketches on Saturday (see what he drew for me in the video at the end of this post): 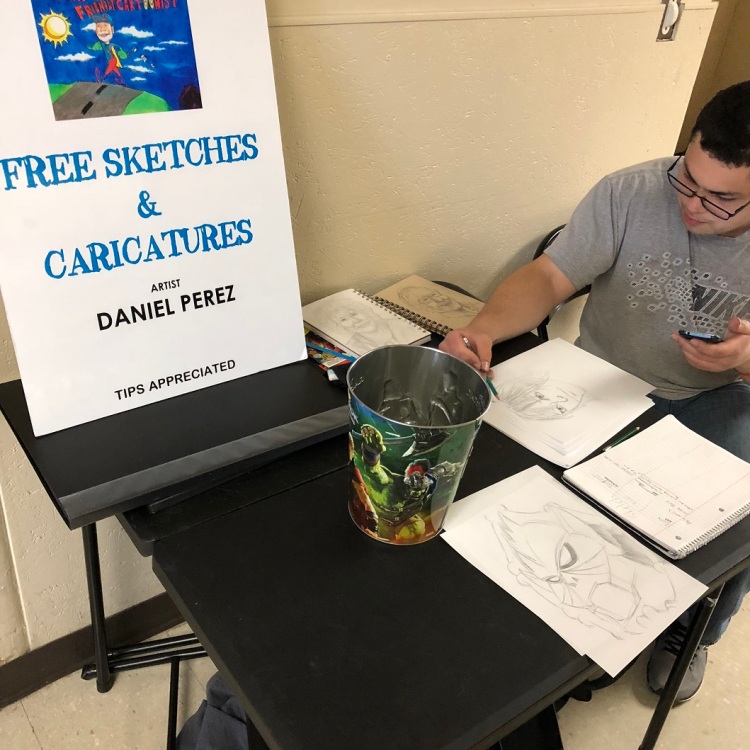 All you had to do was add your name to the queue list and come back later to pick up your sketch request!

But you shouldn’t wander too far just yet because there were probably tables you might have walked past without realizing!

Maybe it was the beef jerky booth or the farmers market style nuts & candy… But here we have what seems like a normal vending machine, but really isn’t!

Unfortunately, gone are the days where you can find trading card vending machines in your local supermarket or bowling alley. But thankfully, a genius vendor stocked up one of these with sports cards, TCG cards, stickers, and fidget spinners! For 75 cents, I had to get a pack of Star Wars cards…

And speaking of Star Wars, it wouldn’t be a con without the presence of the 501st Legion! Costuming isn’t just a hobby for the 501st – it’s a serious passion! They go through strict guidelines to ensure screen accuracy in their costumes and they do it for good causes. Each member eventually gets their own trading card (which I collect) so I was glad to see them around, along with R2-D2 (signed by multiple cast members)! 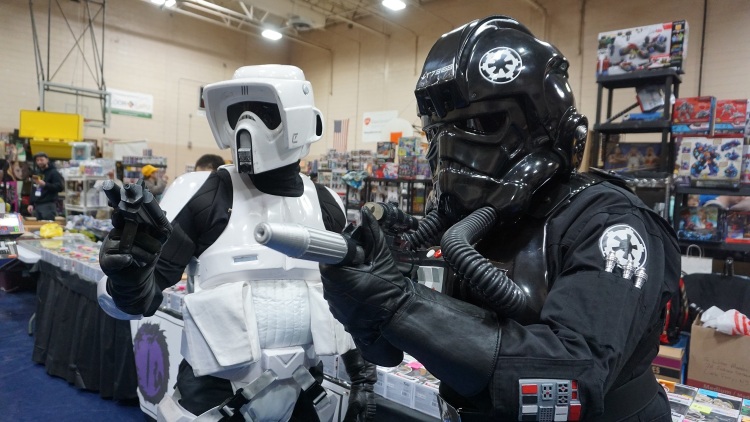 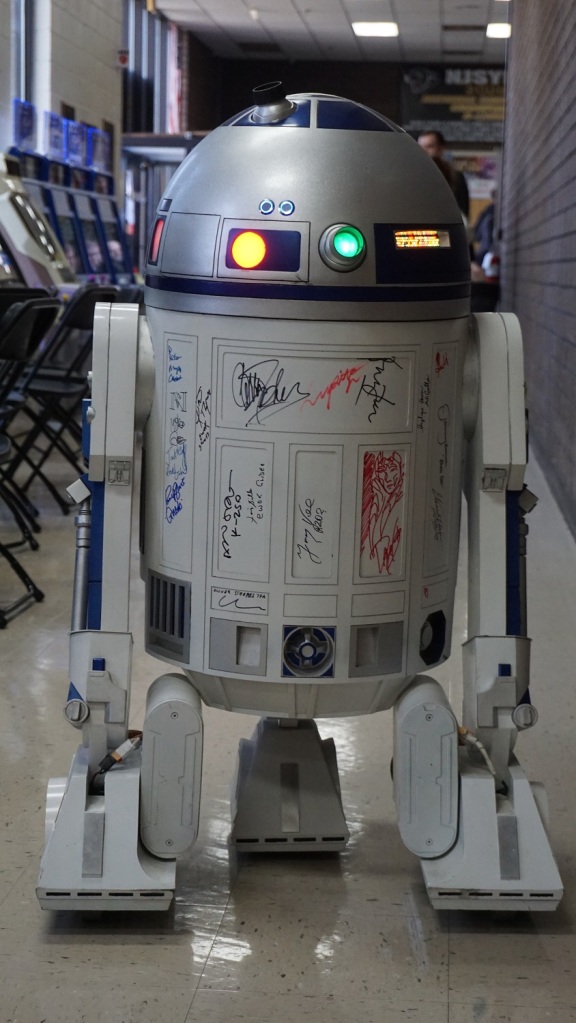 But Star Wars wasn’t the only cosplay around. I saw people dressed up as characters from DC Comics, Marvel Comics, Resident Evil, and even a certain painter:

And how about some photo ops with life-size statues? There was one of Spider-Man, Iron Man, Batman, and Harley Quinn: 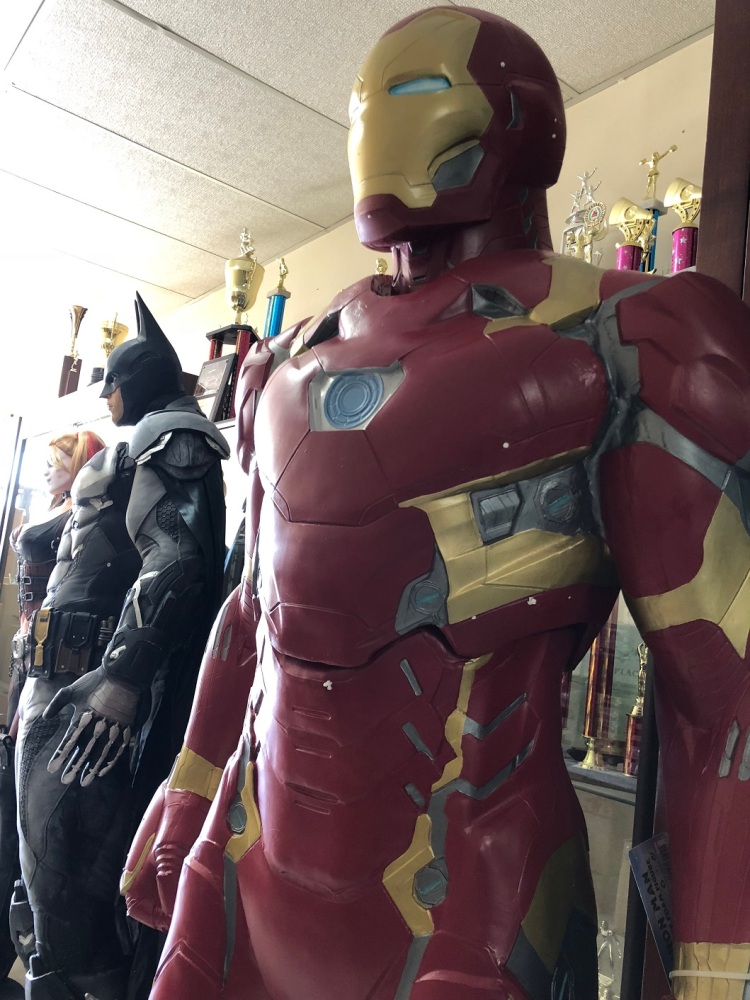 It was a lot of fun seeing them and so many others throughout the convention! 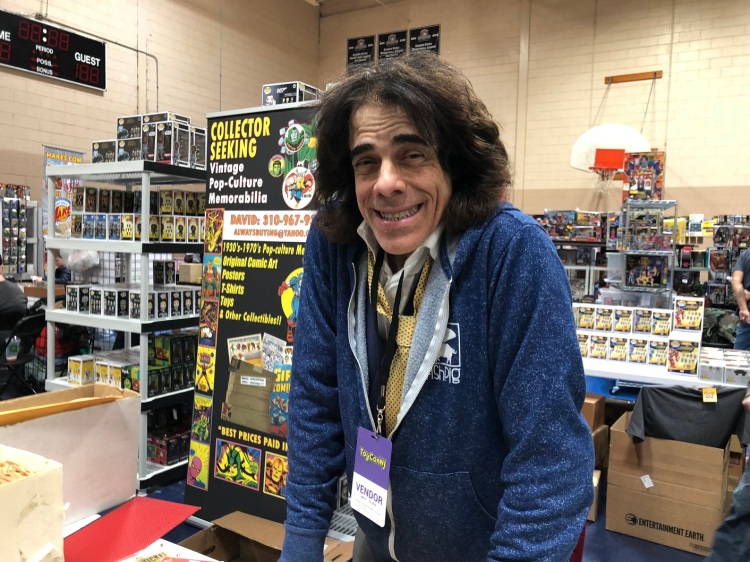 On your way out, you had to try one of the 16 Japanese candy cabs from Wedoca!

Fantastic games like Alien vs. Predator, Gundam vs. Gundam Next, Street Fighter, Dungeons & Dragons, and so many more! 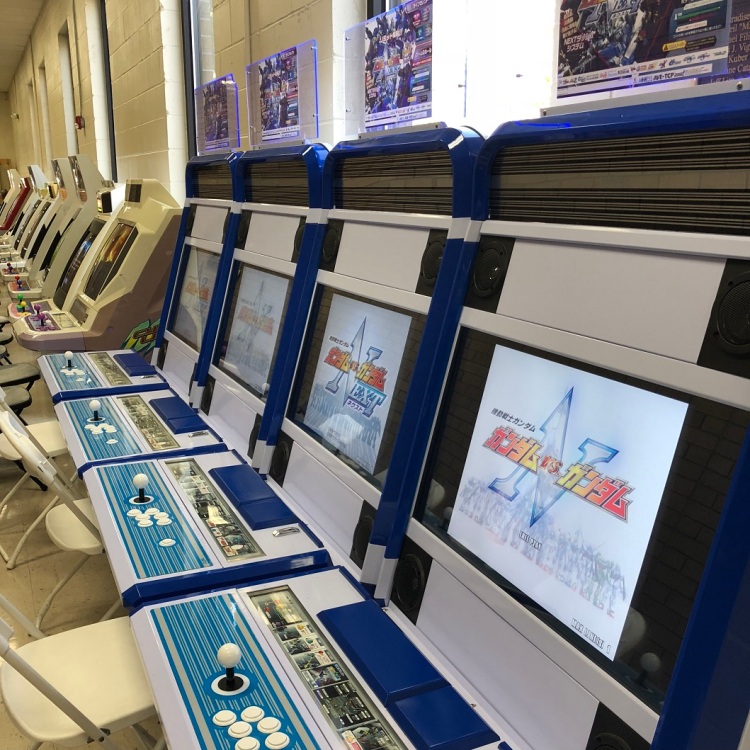 And finally, as if all of that weren’t already enough… outside the Parsippany P.A.L. building were 3 iconic vehicles: the A-Team van, Knight Rider’s K.I.T.T., and Back to the Future’s DeLorean:

It was free to take pictures of the vehicles but to step inside, all you needed to do was buy their t-shirt or chip in some cash (I can’t imagine it’s cheap to own or maintain any of these, let alone 3!).

All in all, my first experience with ToyConNJ was unbelievable. If you’re a collector and somewhere in the area next year, I highly recommend it! Even walking in, I didn’t know I “needed” so many things until I walked out with them in my hands! 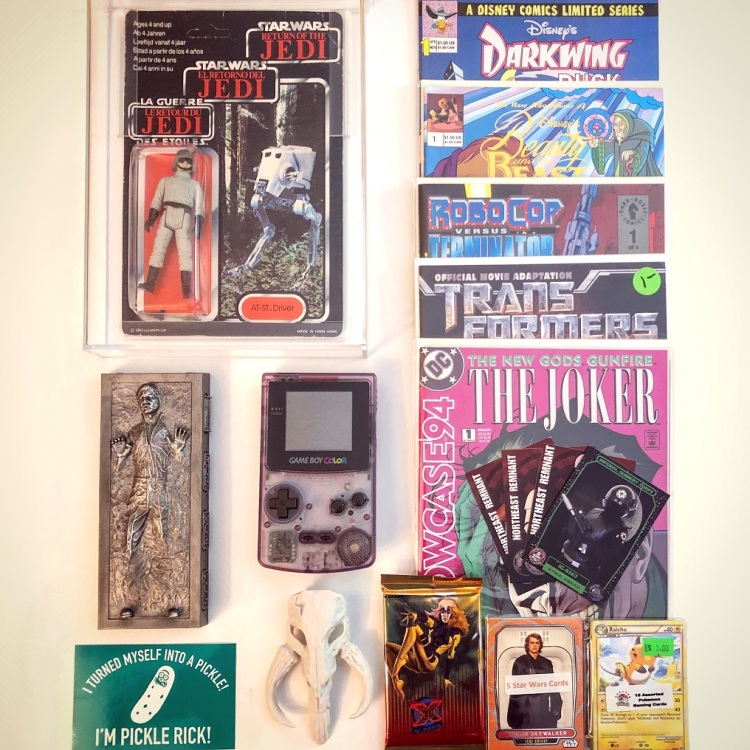 And who knows? Maybe you’ll even win the raffles going on all weekend long! In fact, for just a few more bucks you can get additional tickets to increase your chances! This year’s prizes included a 6″ Marvel Wolverine figure, 1/4 scale NECA figures, 6″ Star Wars Black Series Captain Rex, die cast cars, Pokemon cards, and more!

So be sure to check out ToyConNJ on their website and Facebook, and watch my video below for a quick recap!