The Great Philadelphia Comic Con was back at The Greater Philadelphia Expo Center this year for yet another fantastic gathering! It felt like Artist Alley was bigger than ever, the Celebrity Guests were top notch, and the space was really maximized! So let’s check out some of my favorite highlights of the weekend and be sure to stay for the video at the end!

The Expo Center was divided nicely with the halls sectioned off pretty clearly – from Artist Alley to Autographing and everything in between, it was easy to navigate and recall whose booth was where. Since I was running around a lot (visiting vendors and attending panels), knowing your way around after one walkthrough is a real advantage!

But first, checking into the con couldn’t have been easier. After getting through the line, a staff member scanned us in and on the counter were free comic books from Zenescope. Already off to a great start!

There were tons of vendors with rare wall books, boxes of back issues, graded books, and so many more comics – and that’s exactly what you want to see at a Comic Con! But what I particularly love about the Great Philadelphia Comic Con is that their motto is “Get UR Geek On!”. In this day & age, the comic book genre and pop culture almost go hand in hand thanks to superhero movies breaking box office records (I’m looking at you, Avengers: Infinity War), the number of comic book TV shows at an all time high, and the passionate hobby of cosplay!

Only a convention of GPCC’s caliber could house such a diverse number of interests and hobbies. In fact, there was a whole corner of the show floor solely devoted to cosplayers – novice and professional alike. I even found some booths offering cosplay repair for those who undergo accidents while at the show!

But on Saturday, much of the excitement and buzz surrounded the cast of the CW’s new hit superhero show, Black Lightning!

Not only is it an amazing show, but you can tell how genuinely appreciative the cast was of the fans and the success of Black Lightning. Cress Williams, Nafessa Williams, China Anne McClain, Marvin “Krondon” Jones III, and James Remar were all present and even held a panel to talk about Season 1 and the future of the show, along with moderator Eric Moran and Black Lightning co-creator Trevor Von Eeden. 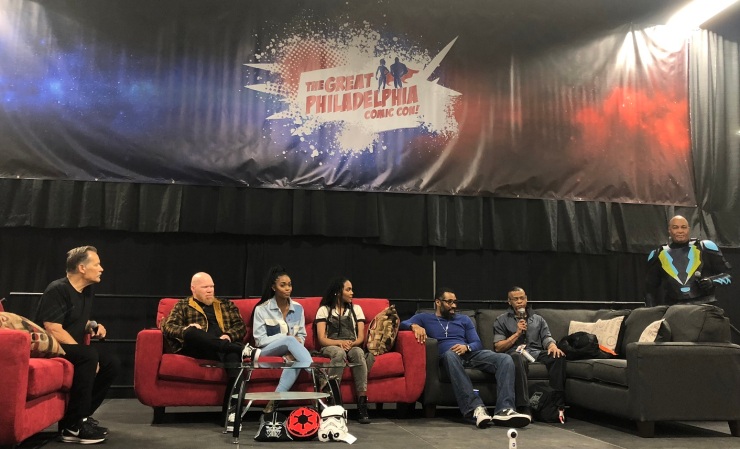 With such awesome programming, panel rooms were constantly energetic and you could sense the passion even if you weren’t sitting in! Panels were going on all weekend for franchises such as Power Rangers, Game of Thrones, Sesame Street, Netflix’s Luke Cage, and of course Star Wars!

Afterwards, I was able to say hello to some of the celebrities in the autographing area. Boba Fett himself, Jeremy Bulloch was a pleasure as always – polite, happy to meet his fans, and excited to see what he’s signing next.

Also from the panel was Bill Hargreaves, the propmaster known to be responsible for the creation of such droids as IG-88, the Imperial Probe Droid, and EV-9D9. 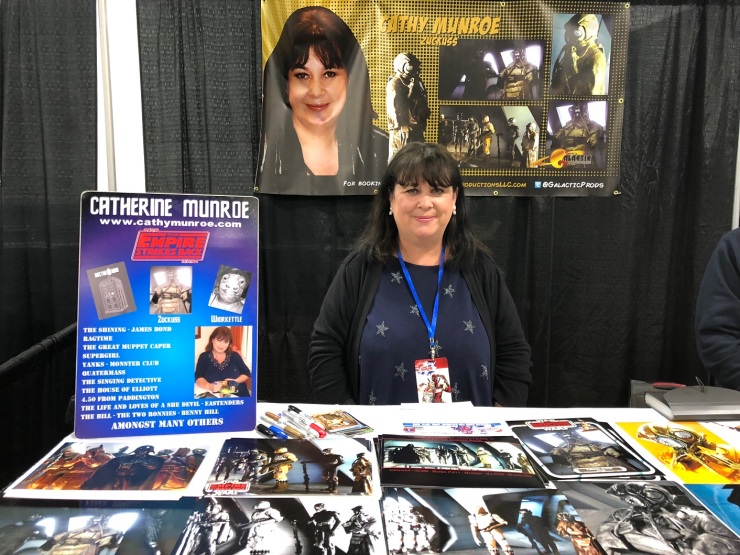 It was so much fun talking to them about their sequel trilogy experiences and the rarities of their action figure counterparts!

I was particularly excited about many of the guests GPCC invited this year because some of them don’t come to Comic Cons, let alone the States!

But the last celebrity I met this weekend was Ian McElhinney who’s known for his work on Game of Thrones, Star Wars Rogue One, and now Syfy’s show Krypton. I easily spent the most time talking with Ian, who is an absolute delight. If you haven’t started Krypton yet, you have to give it a try – the acting, story, and effects exceeded all my expectations. Here he is signing my Krypton comic book:

And with comic book artists all around, you could get your books signed by them too! Artists like Jim Steranko, Mark McKenna, Bob Camp, Chris Campana, and so many more established and up & coming creators. Pick up a variant cover, score a limited edition print, or even get lucky with a convention commission request!

One particular artist I discovered on Instagram prior to Great Philadelphia Comic Con was Dawn Griffin. I was reeled in by her fun style and punny crossovers. Right off the bat, one of the first images I saw at her booth was the Octopus + Transformers crossover… Octopus Prime! 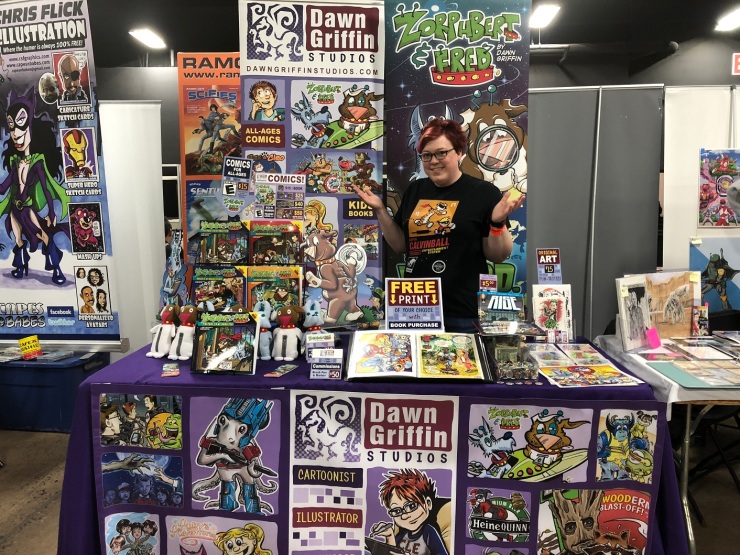 If you’re less about the art and more about the pop culture aspect of Comic Cons, you could visit one of the many exhibitors who sell memorabilia anywhere from Harry Potter wands to Power Rangers helmets, from Tardis replicas to Lego minifigures:

And what’s a Comic Con without some freebies, right?

Allied Philadelphia had a special booth set up for the opening weekend of Avengers: Infinity War where fans had a chance to win some pretty sweet Avengers swag by completing a scavenger hunt. Throughout the convention were 6 Infinity War posters hidden in plain sight. The goal was to find and photograph all 6 – then you can choose from a tote bag, theatrical poster, or t-shirt. Additionally, if you upload the posters on social media using hashtags #InfinityWar & #GPCC2018 you’re entered to win a prize pack which contains all the above items PLUS two Fandango codes up to $21 each to watch Infinity War. 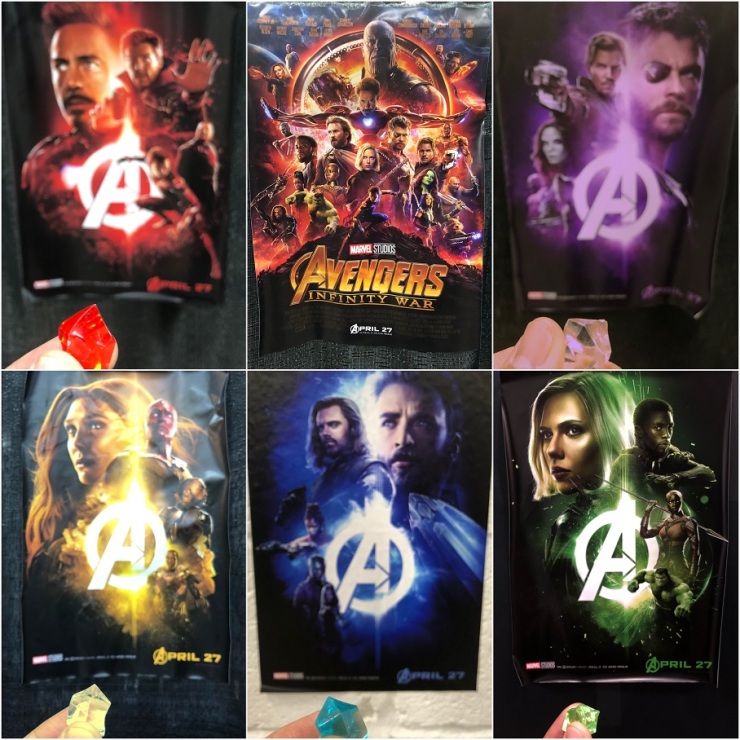 …and I won a prize pack!!! Plus, everyone entered is automatically registered to win the Grand Prize which includes a $250 gift card!

Be sure to watch the video below to see how it all went down!

Lastly, the Great Philadelphia Cosplay Contest was not to be missed:

Countless fans not only participated but sat in to see their favorite characters come to life!

On a separate occasion I was able to see the Philadelphia Avengers, a charity cosplay group specializing in Marvel characters to assist fundraisers, medical research, veterans, and other charitable groups. They were a nice bunch and check out their costumes! 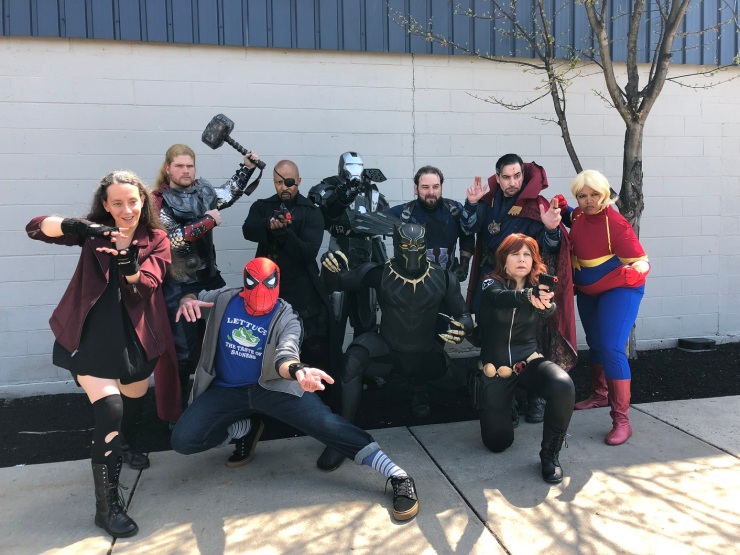 All in all, The Great Philadelphia Comic Con was in fact great! If you’ve never attended GPCC before, they’ve already announced next year’s dates: April 12-14, 2019 at the The Greater Philadelphia Expo Center again. And if you’ve never attended a Comic Con in general, not only is GPCC a great place to be a regular but it’s the full-on experience! Maybe I’ll see you there next year!

There was an error retrieving images from Instagram. An attempt will be remade in a few minutes.